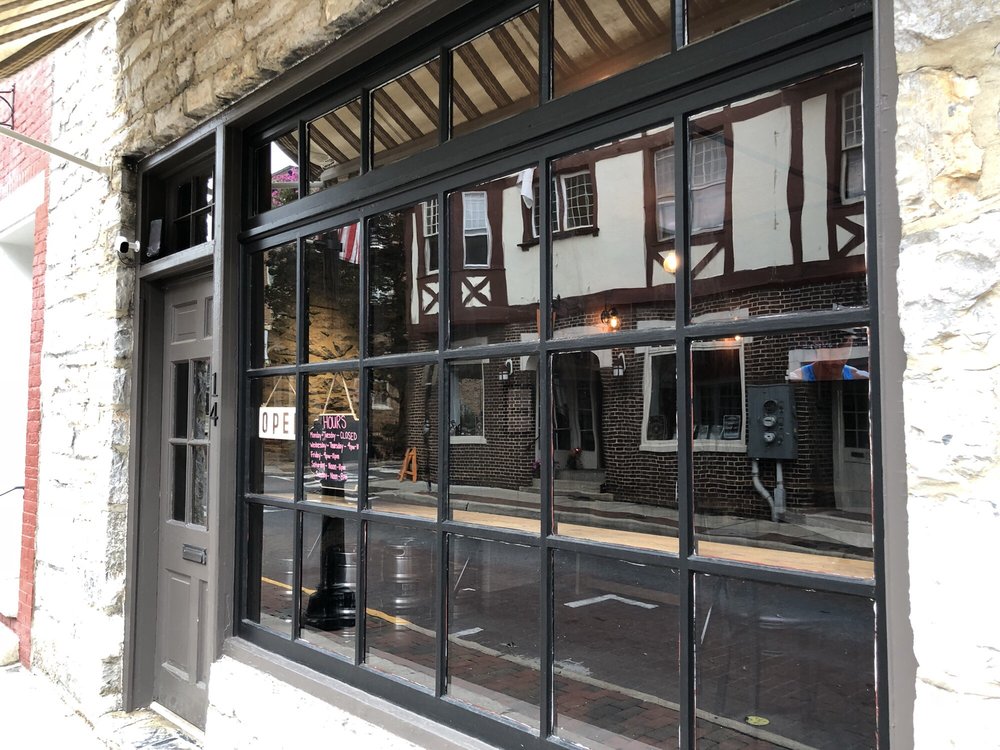 An elderly couple opens the door to wheel an umbrella stroller inside the cafe. They’re smiling and proud to be out on a walk with their “someone special,” and my initial instinct is to look for a grandchild in the stroller. Instead, it’s a very small, curly-haired dog. It’s strapped in and nestled beneath a blanket, eyes bright and beady taking in the cafe scene.

I gesture towards the doorway and say it quietly — half-joking, half-serious — so only my friends will hear. Confrontation is not the goal, but I’m inexplicably uncomfortable with the baby-dog thing. No one else seems to make much of it, though.

The cafe crowd seems to be a mix of tourists and locals. A cheerful chatter fills the relatively-small space, while television screens flicker in each corner. One screen is playing an animated film. Another screen is playing an old episode of NCIS: New Orleans. And a third screen is playing muted baseball commentary. We’re in a historic neighborhood of Winchester, Virginia, but there’s nothing historic about this establishment. It seems to be a brand-new place that brings out all the quirks of contemporary culture.

We are perhaps an hour removed from the baby-dog thing when I notice a car creep into a new parking spot just outside. A man in the driver’s seat is holding a smartphone, in camera mode, and he seems to be testing out different angles to take a picture of himself. He tries using the far side of the street as his background, and then apparently decides that the near side of the street is a better background. He inches the car forward until he gets his shot just right — and then he starts recording a video.

In the video, he’s talking (or singing, or rapping) and gesturing freely with his free hand, and he goes on for a minute or two before pausing to check the results. It would seem that he’s not satisfied with the results, though, because he backs up the car slightly and starts again from a slightly different angle. He looks kind of silly, like he’s holding an intermittent conversation with an imaginary friend. But his body posture makes it seem like he thinks he’s pretty cool. But I don’t think he’s very cool at all.

I point and get my friends to laugh with me. It seems comical — and kind of pathetic — that this guy is so caught up in his social media while being so unaware of the real world around him. I bet his Instagram story makes it seem like he’s funky and fresh, but I also bet he lives in his parents’ basement and has a hard time maintaining conversations with anyone outside of the virtual environment. He goes on and on with the smartphone, twisting and tweaking things until it looks just right online. In real life, though, it seems his reality is sad. How lonely does someone have to be to go cruising until just the right parking spot opens up, with just the right background for a video?!?

The next time my attention is drawn back to the car parked outside the cafe, there’s no sign of the smartphone this time. Instead, my eye is caught by the driver’s left hand waving out the window of his car, with a gold wedding band flashing in the sunlight. A young woman (presumably his wife) notices the wave and trots towards the car with a shopping bag in hand. She jumps into the passenger seat and greets her husband, and then they drive off together. Maybe they’re out on a date. Maybe they had to stop downtown to pick up a gift on their way to a party. The narrative I had constructed for the driver is instantly adjusted, as I realize he was just trying to fill some down-time while waiting for a loved one: just like I’ve done a million times, checking sports news… or catching up on social media… or reading a book.

I’m instantly embarrassed by my self-righteousness and judgmental attitude toward these strangers. Who am I to look down upon an elderly couple with a baby-dog? Why should I assume that anyone with a smartphone in selfie mode is a narcissist? What gives me the right to summarily dismiss those who use their time or money or social circles in a way that’s different from how I choose to use these resources? I’m the problem. My pride is the issue here. I can only point at myself and say:

This entry was posted in Culture, Introspection, The United States of America. Bookmark the permalink.