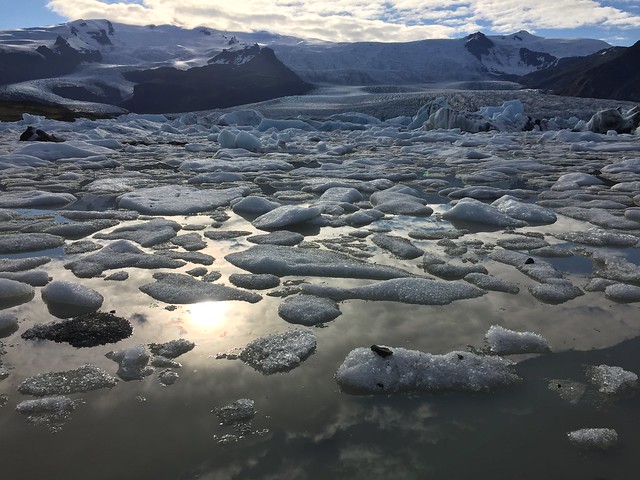 White clouds tumble into white sheets of snow and ice, sliding down off the Öræfajökull, into the Fjallsárlón. It moves at a glacial pace because, of course, it’s a glacier. Still, I’m overwhelmed by the sight of this ice-covered volcano dropping its icy mantle into this iceberg-studded lagoon. All right in front of me. 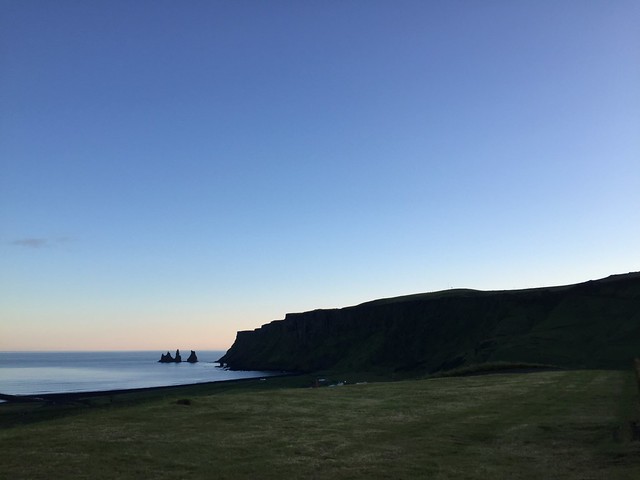 I wasn’t fully prepared for the superlative scenery of Iceland. I’d read guide books and researched quite a bit on the internet. I’d talked to other people who had visited. Still, the actual experience overwhelmed me. 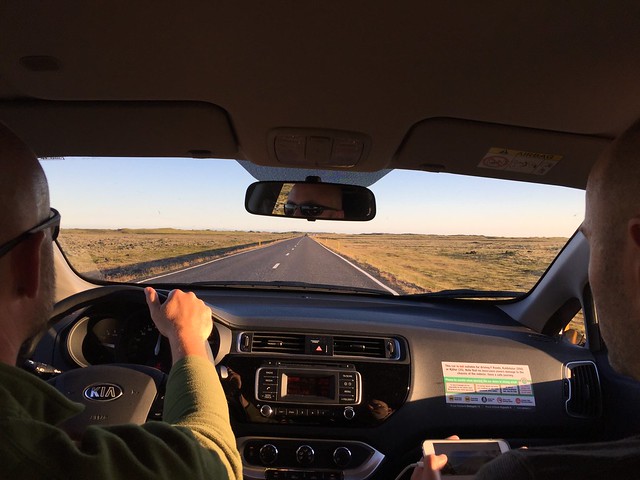 We set out for our second day in Iceland with simple objectives: Head for the black sand beaches at Vik (the southernmost tip of this most northerly country) and take whatever adventures may come our way. If we felt up to it, we might push on to the glacial lagoon at Jökullsárlón. But that was about as much as we dared to hope might happen on this, our first full day of touring Iceland for our 40th Birthday Celebration of Life, Friendship, and Adventure. #Iceland3x40 #MidlifeCr_Iceland 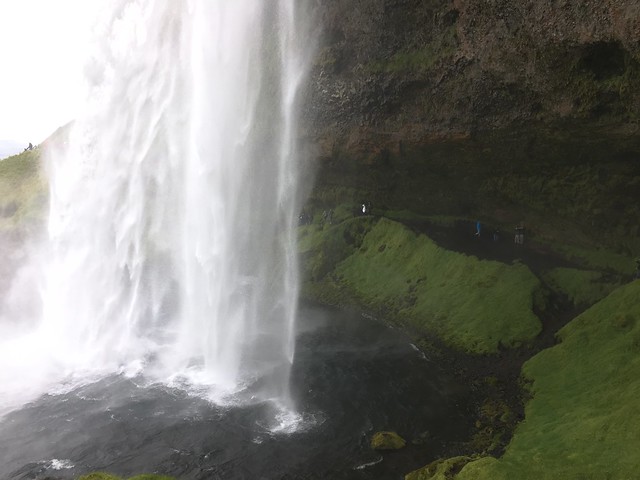 Before we even made it to Vik, however, we were compelled to clamber out of the rental car to spend an hour and a half climbing over, under, around, and through the four waterfalls at Seljalandsfoss. 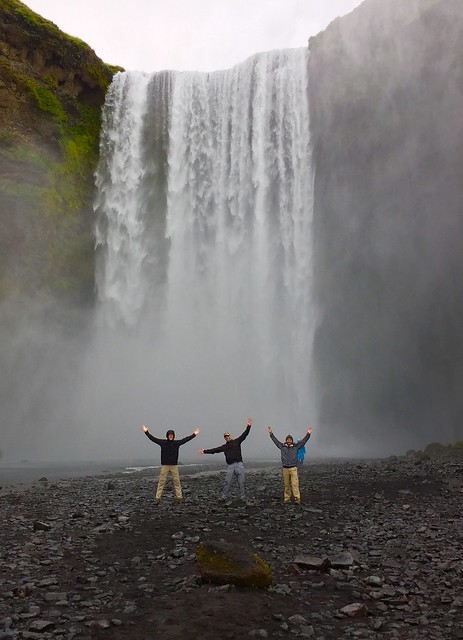 Just a short drive further, we made another spontaneous stop to scamper into the spray at the bottom of the mighty Skógafoss and have a Spaniard take our picture before jumping back into the car and continuing southward.

Along the way, we found ourselves laughing at the other apparently-unnamed waterfalls and cataracts spilling down from impossibly green and impossibly steep hillsides.

As we passed cloud-covered volcanoes, secret lagoons, and other sites of interest, we kept saying to ourselves, “I hope we’ll have some time to stop and see that on the way back!” 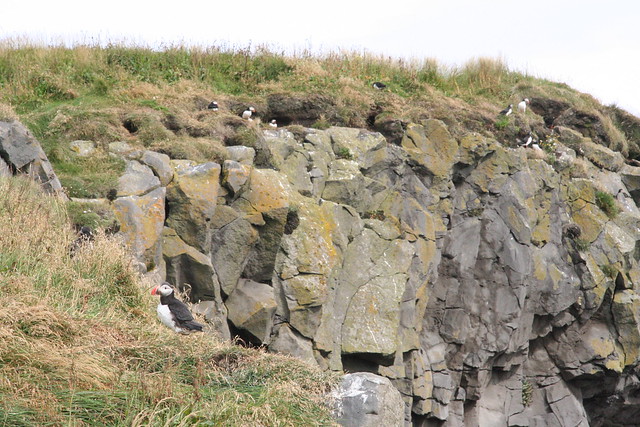 Just before Vik, we crept up to the top of the cliffs at Dyrhólaey — in hopes of maybe, possibly, spotting an Arctic Puffin, likely somewhere in the distance — and we were delighted to find thousands of the birds out on the water, swarming the air, nestled into the cliffs right at our feet, and seemingly mugging at our cameras while we took photographs of them and their breathtaking surroundings. 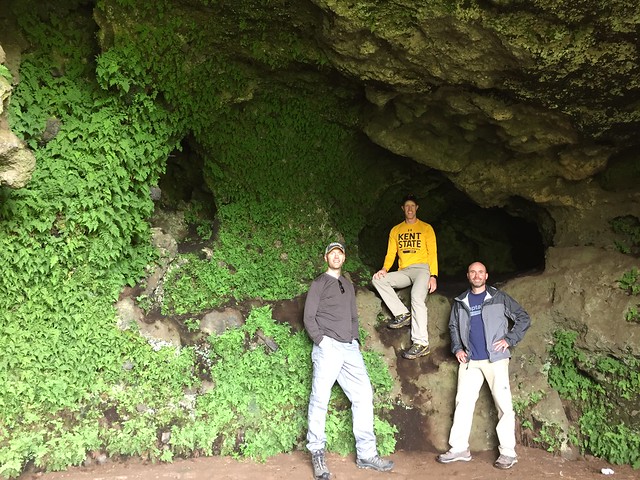 Even when Vik was clearly in sight, we couldn’t pass up the opportunity to visit the cave where medieval Vikings regularly met to hold council. 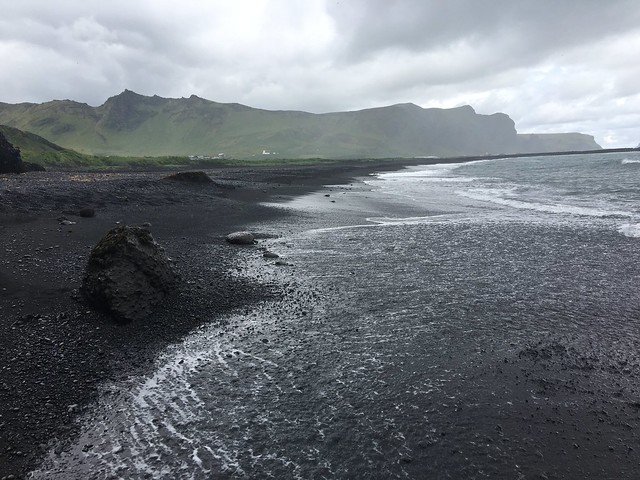 Then finally at Vik, we watched white waves crash onto black beaches and then found shelter in a cave as a brief rainstorm passed through. As we ate our lunches, we agreed that the adventure should continue: eastward to the glacial lagoons. 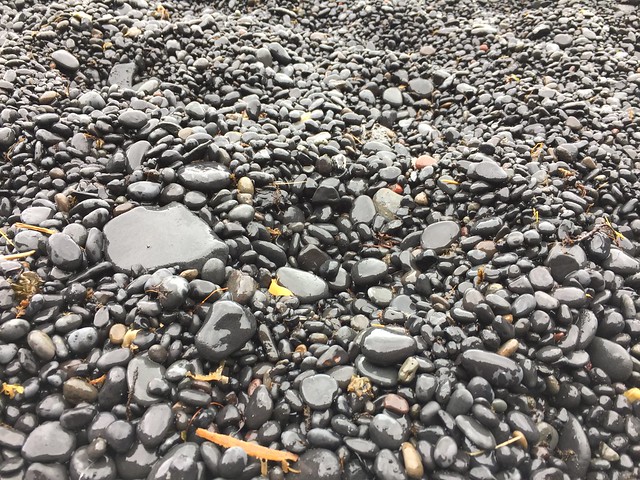 On the way to the glacial lagoons, we passed more hulking volcanoes with their heads in the clouds… A hitchhiker with a creepy half-smile on his face… Vast yellow plains stretching between mountain and sea… Strange green bubbles of grass- and moss-covered lava on either side of the road… An older couple stopped in the road, with a twitching, dying sheep lying on the pavement in front of the vehicle while the gentleman talked on his mobile phone and the lady sat wringing her hands in the passenger seat… So much to see, and so little time in which to see it all! 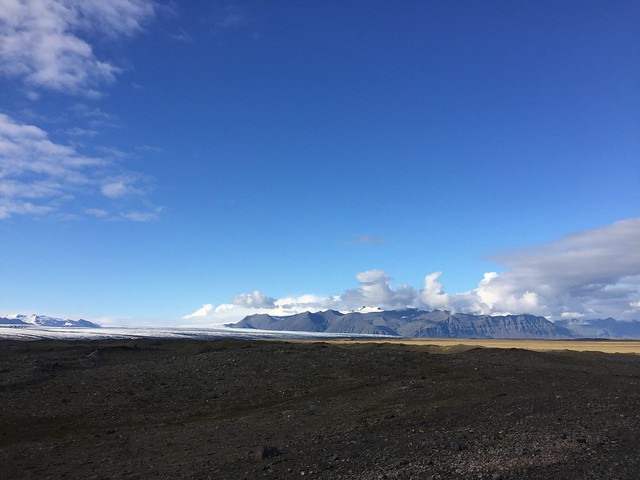 The glacial lagoons, though, made us forget everything else. 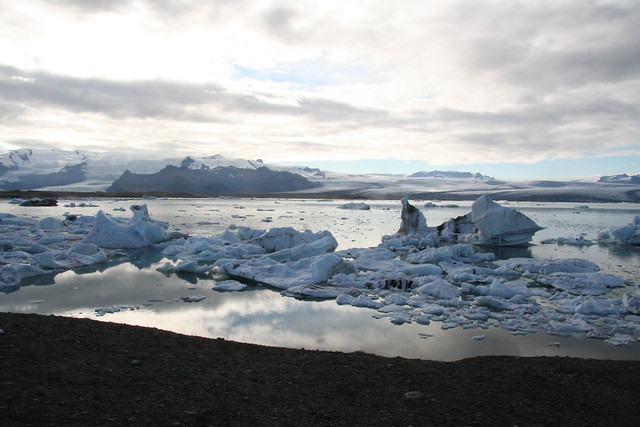 The shades of blue, green, and gray — reflected in the water, the ice, and the sky — were otherworldly. The icebergs drifted like clouds: some as big as my house back in Kent, some the size of a basketball. Seals ducked and dived in the water between the icebergs. Tourists scrambled for pictures (we knew we were visiting during a busy vacation season, but even so we were surprised to discover that Iceland is not the desolate, uninhabited wild lands it’s often purported to be). Even with all the crowds, though, it was somehow easy to tune them out. To feel like we had our own private wonderland for skipping stones, taking silly pictures, and quietly soaking in the scenery. We were all glad we traveled the extra miles, to see the Jökullsárlón. What’s Iceland without the ice, right? We shot a ton of pictures: the icebergs, the seals, the mountains, my friends, everything! It was other-worldly. Magnificent. Awe-inspiring. I kept muttering, “I can’t even…” Sometimes the muttering became bellowing. “I. Can’t. Even.” 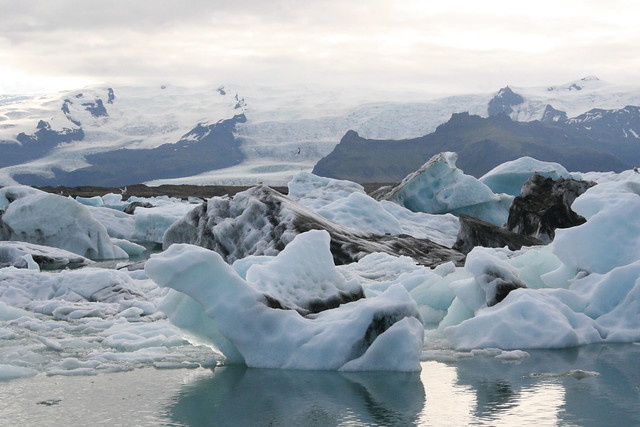 The real coup de grace, though, was the second ice lagoon: the Fjallsárlón. We didn’t even know it existed. Even when we turned off the road to see it, on a whim, a glimpse, a road sign, we didn’t expect much. In fact, we told ourselves we were going to speed-walk our way there and back to the car, just to say we saw it, snap a picture, and move on. 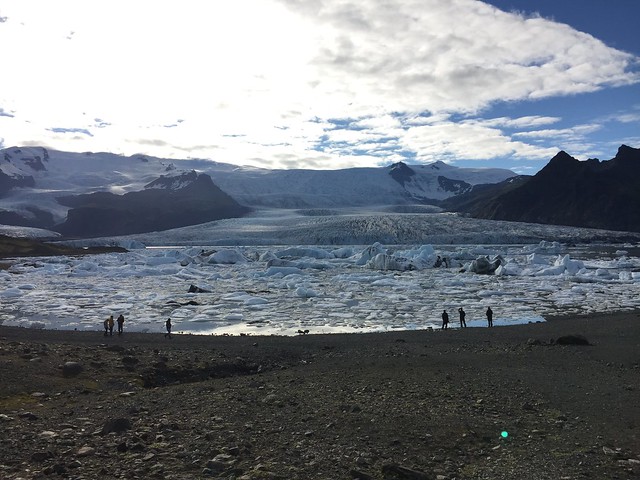 But then we saw it, like a vision of heaven coming down to earth: the clouds, the glaciers, the icebergs, the water reflecting the setting sun. I simply couldn’t do the quick visit / tourist thing. I had to sit on a rock and breathe. The moment overwhelmed me and made me think — which was, actually, kind of the point of the whole trip. Our mid-life crisis. Our celebration of the passage of time. I couldn’t just snap-and-run. I had to sit down on a rock and breathe. Absorb the enormity and stillness. The blue of the water. The white of the clouds and ice. The gold of the fields off further to the east. I heard an echoing crack off to the north, high up the glaciated hill: a massive sheet of ice sliding, slipping, shifting, breaking, drifting, settling. At a glacial pace.

“It makes me sad,” Jason said, breaking the silence. 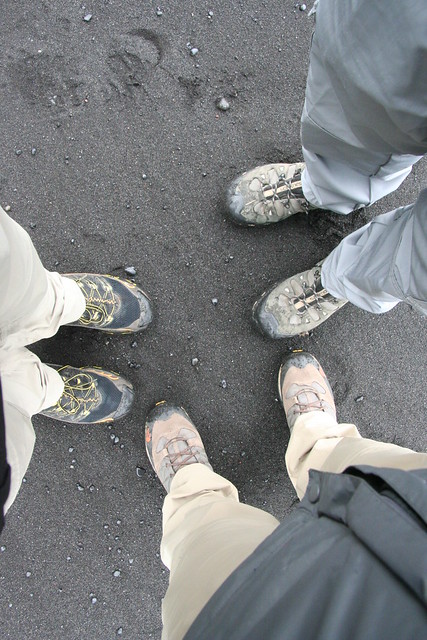 “Hmm?” I asked, with my eyebrows as much as my voice. I had a feeling of what he was getting at, but I wanted him to say it.

“I know it’s strange, but it’s sad because I know I’m never going to experience this again. Not in the same way, at least.”

“We never would have thought of that when we were 20 years old,” Chad adds. “But we couldn’t. We weren’t capable at that point in our lives.”

This is the thing about middle age. 40 years old. A couple of decades providing some time to love and to lose. To put beauty in perspective. I still haven’t completely figured it out, but it seems that the pacing is a part of it. The way time slows down and speeds up, it adds complexity. And complexity adds beauty. And beauty adds awe and submission to that which is beyond us. A life of worship. 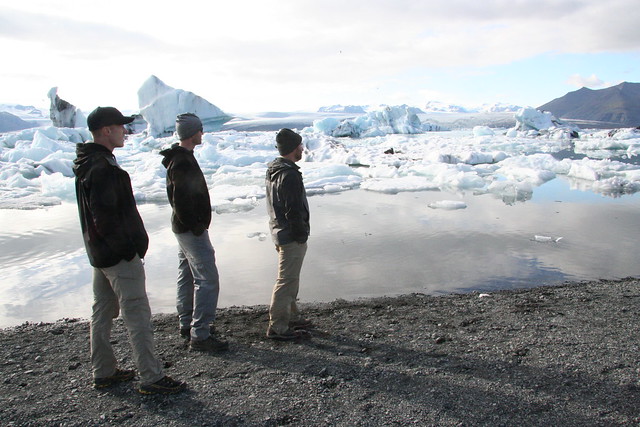 It’s a hopeless exercise, isn’t it? Trying — fumbling — to put words to this inexpressible apprecation. For life. For time. For God. I can’t even. I. Can’t. Even. 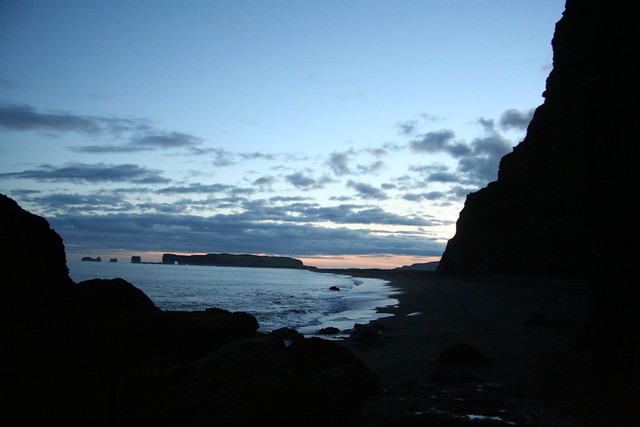 Still, the moment is significant enough that I must try to capture it. To freeze it in ice and stop it up in one of the stillest places on earth. Even if it keeps sliding, slipping, shifting, breaking, drifting, settling. I take solace in the fact that it’s at least moving at a glacial pace.