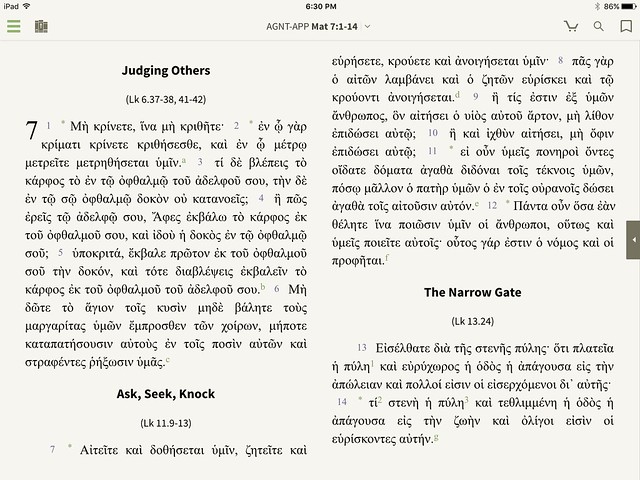 “The… who / what / which… is from you… man…” All right: look for the nominative, the verb, the prepositions, and shift the word order around accordingly. “Which of you men…” I’ve been taking Greek lessons from my father for almost a year now: every Thursday at one o’clock in the afternoon. Sometimes, we follow lessons from J.G. Machen’s New Testament Greek for Beginner’s; but more often, we just wade into the text and figure out a way forward, together.

I don’t know the first two words, so I skip ahead to the part that I recognize: “the son… of him… a bread” Huh? Maybe those first two words would help it to make a little more sense. It’s a bit discouraging that I already need to break out the research materials, after so much study through the months. But my Dad never seems to mind the detours and slow-downs, so why should I?  I look up ὃν αἰτήσει in the anlex and discover that the first word is a prounoun, referring back to the subject of the sentence, and the second word is a verb, αἰτέω (to ask, to demand, to ask for), parsed: Indicative, Future, Active, Third person, Singular. So putting it all together, roughly: “whose son would ask for a bread (or a piece of bread)…” OK. We’re getting somewhere.

“No stone… [something]… to him?” I have to look up ἐπιδώσει — and I decipher a rough translation: “would give.” So here’s my attempt at the whole sentence, from the beginning of the verb up to this point: “Which of you men, whose son would ask for a piece of bread, would say ‘no’ and give him a stone instead?” I confess that I’m playing loose with the Greek a little bit. The final word, “instead,” is not in the original text, at all. But I’m getting a feel for it. The original text is familiar enough that I can fill in some of the gaps from my memory of the English translations. But even if that wasn’t the case, it’s all there. I can see the meaning coming up out of the page. It’s a thrilling feeling for an amateur linguist like me. And my father before me.

The second sentence goes quicker because it uses a lot of the same structure and vocabulary: “the… and… fish… he asks… no [something]… would give to him?” Look up the missing word, use my recollection of Greek grammar to restructure the sentence in a way that sounds more natural to English ears, and I’ve got it: “And if he would ask for a fish, [which of you men] would say ‘no’ and give him a snake [instead]?”

“If therefore you guys… [something] being… you know… gifts good give to the children of you… [something] [something] the father of you… who… in the heavens… give good… to [something] of him.” I look up the missing pieces and check my parsing of verbs and declining of nouns according to the endings of those vocabulary words whose stems I succeeded in recognizing. It’s rough. It takes me maybe twenty minutes to come to a satisfactory translation of these three verses from the seventh chapter of the Gospel of Matthew.

Which of you men, whose son would ask for a piece of bread, would say ‘no’ and give him a stone [instead]? And if he would ask for a fish, [which of you men] would say ‘no’ and give him a snake [instead]? So, if you guys (being sinful humans) know how to give good gifts to your children, how much more will your heavenly father give good stuff to those who would ask him!

It’s an imperfect translation, but it’s my translation — and I’m proud of it. The truth revealed in this passage of Scripture is a reason for pride and gratitude, too.

My Dad is a giver of good gifts. He takes time to patiently instruct me in my studies. He regularly tells me that he’s proud of the way my skills are progressing. He equips me with the tools I need to keep learning. And he’s just there, to enjoy the process with me. Our Thursday afternoon studies have become a special part of my week, and as time has passed I’ve become keenly aware of the ways that our Greek Lessons serve as a metaphor for the rest of my life, as well. I’ve received a lifetime of instruction, encouragement, equipping, and personal engagement. What good gifts from a good father! What’s best of all, though, is that my Dad would be the first to admit that he’s a sinful human, and thus he would point me towards our Heavenly Father, who takes all this goodness to another level entirely.

There’s much for me to celebrate this Father’s Day. And for that, I am grateful.

This entry was posted in Family, God, Introspection, Language, The Bible. Bookmark the permalink.