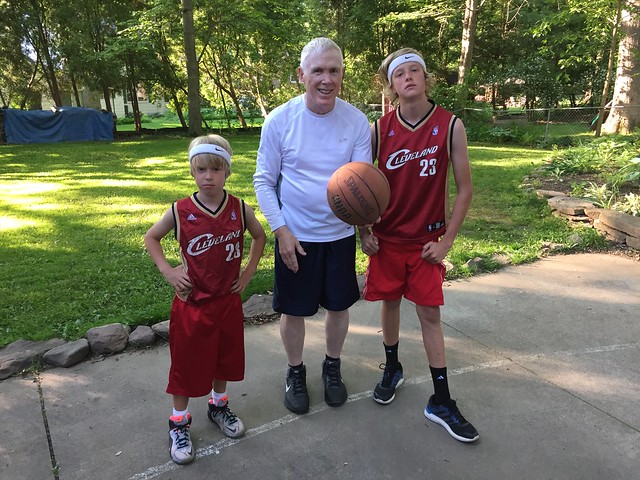 I don’t know how much longer my Dad and I will be able to hold them off.

For my Dad’s 65th birthday, our family promised a special inter-generational basketball competition — let’s call it the Asp Basketball Championship (ABC) — followed by ice cream at our favorite local spot. Later on, however, my Dad sweetened the deal by offering a section of hardwood flooring my boys have coveted for several months (it was originally designed to be a wall hanging at my parents’ place, but since it never fit into the final decorating scheme the boys thought it would be perfect as a replica basketball court to be signed by professional basketball players).

So the boys ended up taking our competition very seriously. They designed and practiced several different plays they named “Double-T,” “Flat Earth,” and such. They dressed in perfectly-matched vintage LeBron James jerseys and headbands. They played pre-game pump-up music from speakers set up in our garage. They even got a kid from next door to serve as their “towel boy.”

But still, they lost the Friday evening three-game series: 2 games to 1. It was actually a lot closer than I might have predicted (we honestly did not let them win the second game), yet our experience was enough to prevail. The boys didn’t take the loss very well, and their frustration was understandable. So even though we had the championship — and the hardwood trophy — in hand, we decided to let them try to beat us again in another three-game series on Saturday afternoon. 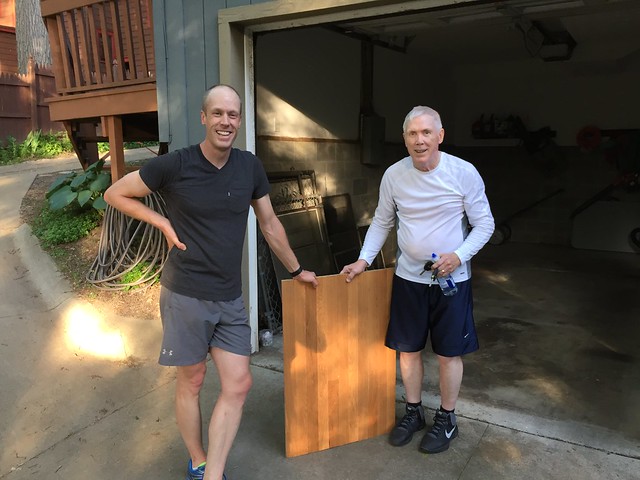 Of course, you might have guessed what happened. We lost the second series: 2 games to 1. We “old guys” ran out of gas (though, to be fair, I ran eight miles earlier in the morning, and my Dad suffers from exhaustion connected with Parkinson’s Disease). We may have also taken some low-percentage shots when the decisive third game was on the line — perhaps in order to allow for the boys some extra opportunities to taste victory — but the days are coming, and indeed are not so far away, when we will be entirely at their mercy for these sorts of competitions. 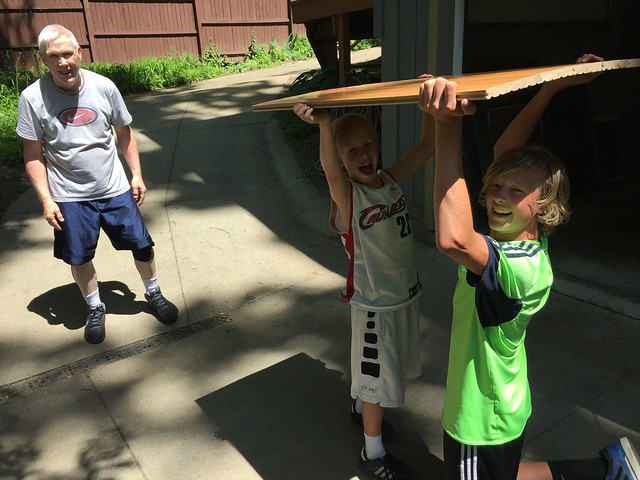 I’m not actually upset about that. I think it’s kind of cool to see the way that the “young bucks” are coming into their own. Even when Elliot and Cor are regularly thumping us — and hopefully other peers, as well — in backyard competitions, I’d like to think that my Dad and I will somehow be a part of their success.

This entry was posted in Children, Family, Sports. Bookmark the permalink.