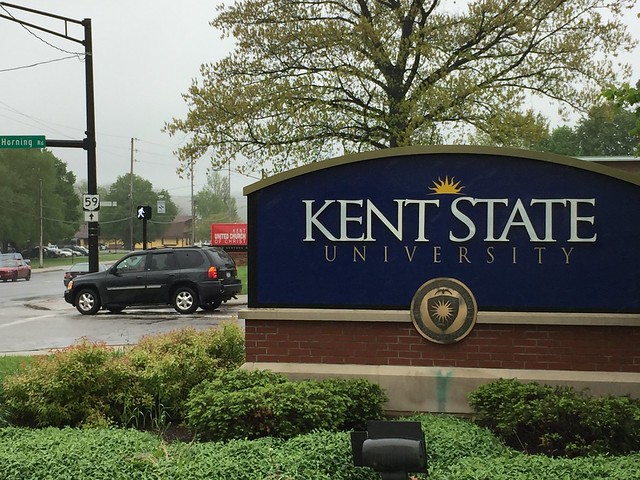 It’s hidden in plain sight, less than a quarter of a mile from the northeast corner of the Kent State University campus. Thousands and thousands of college students pass the place every day — on their way between campus and the closest grocery stores, laundromats, restaurants, gas stations, and a handful of entertainment options — but almost none of them would recognize the establishment by sight or by name: Henry Wahner’s Restaurant and Lounge. 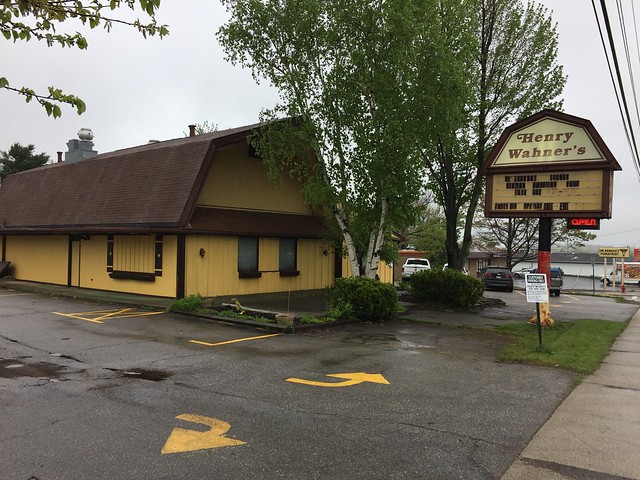 Even if you know that it’s there, however, Henry Wahner’s appearance would never suggest that it’s a hidden treasure. 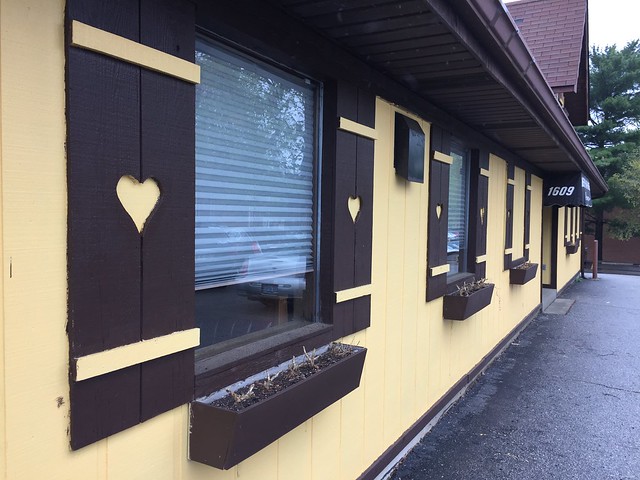 It’s concealed within an ugly, barnlike structure. The exterior and interior are decorated in shades of beige, brown, and yellow. There are some hints of Bavaria about the place: shutters with cut-out heart shapes on the outside, a wall hanging that appears to depict the Neuschwanstein Castle on the inside… But the appeals to the old German Fatherland don’t quite pull off the “classic” or “timeless” look. In fact, it looks quite dated. I’d guess something like 1972. 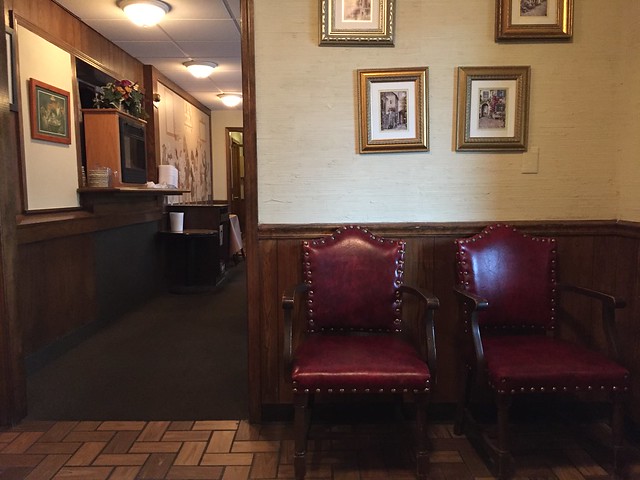 Nothing much about the place seems to have changed since the early 1970s. After one finds the entrance, the visitor to Henry Wahner’s is ushered into the swanky lounge. The walls are covered with wood paneling and tin advertisements for St. Pauli Girl Beer. A mountain of cascading bottles, encircled by a silver railed bar, fills the middle of the lounge. Dim lighting betrays a few grey-haired, overweight townies tucked into vinyl-upholstered booths along the perimeter of the room. They glance up from their drinks with quiet suspicion to size up every visitor, but they don’t make much fuss even on the rare occasion when a group of college students stumble in. 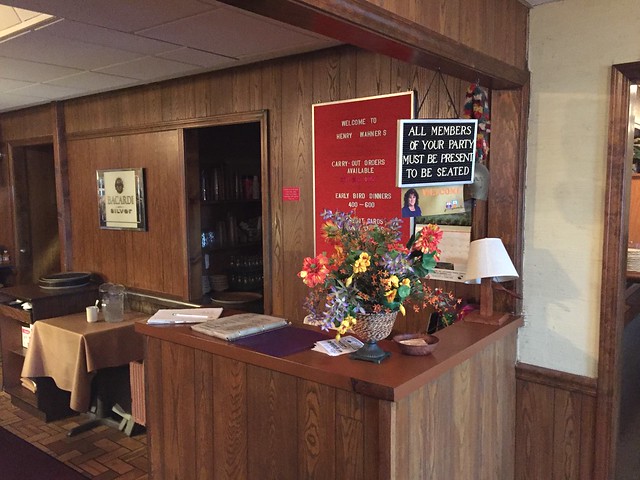 There’s a hallway to the left of the lounge, which leads the way through a dining room to the hostess station. A bouquet of artificial flowers sits on the counter beneath a sign that reads, “ALL MEMBERS OF YOUR PARTY MUST BE PRESENT TO BE SEATED,” and the staff is serious about this rule even when the crowds are sparse. Patrons are encouraged to wait in a corner between the three dining rooms, from which vantage point the rest of the restaurant can be observed. The walls are decked out with wood paneling of the sort favored by my grandparents. Decorative spindles, spaced six inches apart, separate the dining spaces and the kitchen area. The tables are all covered in vinyl cloths and paper placemats. Everything from the furniture to the carpet to the wall hangings echo the hues of beige, yellow, and brown, to the point that it feels almost as if one is looking at a sepia-toned photograph from the earliest days of the establishment. The hostess station is the main exception, with the artificial flowers and a large red pegboard listing the rules of engagement for the Henry Wahner’s dining experience: 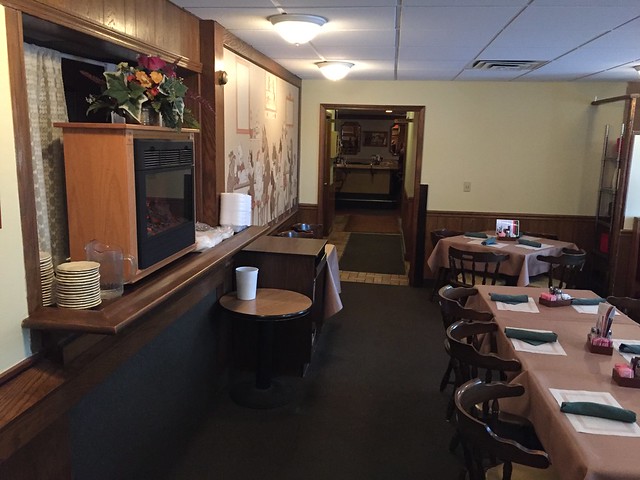 First-time visitors might be inclined to bolt at this point (especially if they didn’t bring any cash) — so many strange signals seeping out from the surroundings — but the best part of the Henry Wahner’s experience is yet to come. 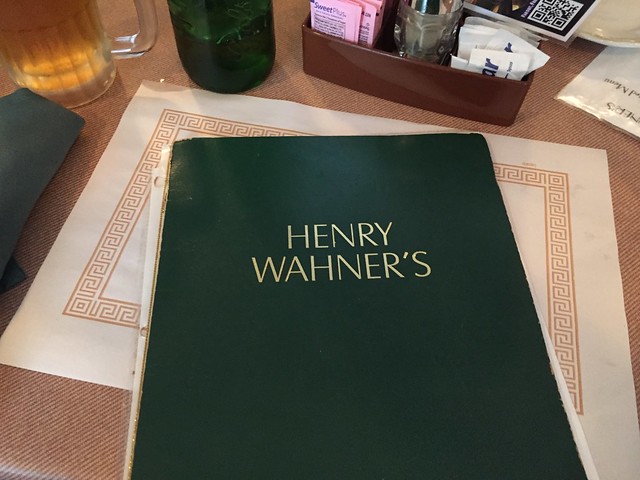 Upon being seated and opening up the menu, one is greeted with a sizable listing of imported beers and authentic German meals: Saurbraten with Potato Pancakes… Kassler Rippchen with sauerkraut and Bratkartoeffers… Schniztel with Spätzles (my personal favorite). The servers have been practicing for decades to provide explanations of what goes into each of these dishes, so they can help to interpret the German dishes. But there are American specialties as well: Prime Rib… Porterhouse Steak… Lamb Chops. The service is efficient, but it takes awhile to prepare the orders. Cold beverages, warm bread rolls, and salads occupy the interim. 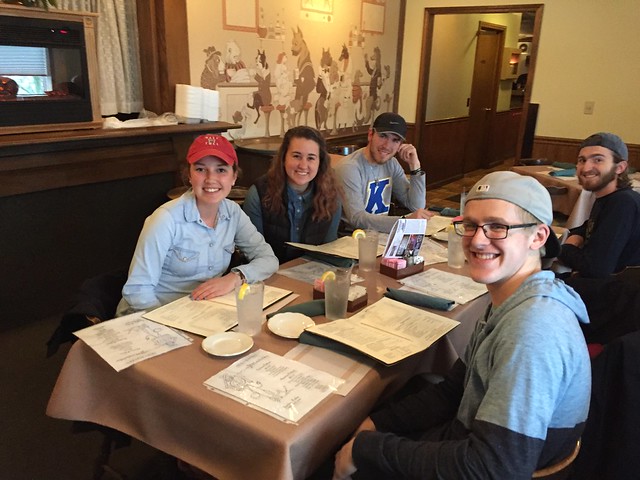 In one part of the dining room, an electric “fireplace” waves and glows. In another part of the room, there hangs a curious, large mural of dogs, dressed in party clothes, enjoying drinks at a bar. The effect is almost medieval, something of a hearth and a tapestry, but more a low-budget 1970s film production of Germany in the Middle Ages. It’s weird, but wonderful. To truly enjoy Henry Wahner’s, one must embrace the surreal setting. 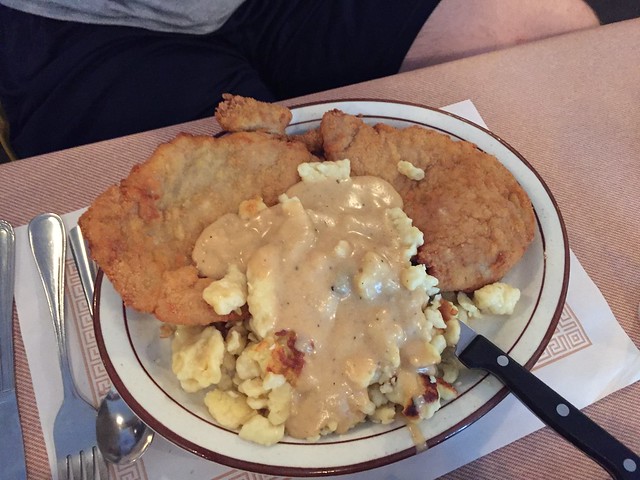 When the food comes to the table, though, any residual awkwardness fades away. Henry Wahner’s portions are enormous. Large cuts of meat hang off the edge of the plate. The food is seasoned and cooked to perfection. It’s so good and so plentiful that I never end up having any room for dessert, though there are a number of tempting offerings (both German and American) on the menu. I’ve taken numerous people out to eat at Henry Wahner’s over the past several years, and no one has ever been disappointed by the food. 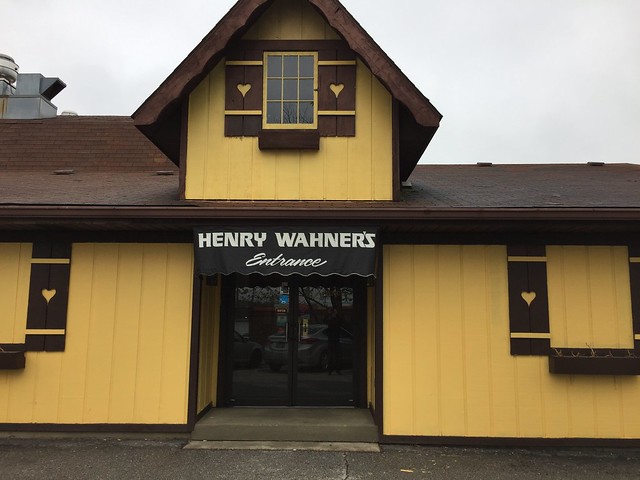 The prices and calorie counts are such that most people couldn’t afford to eat there every day. And the ambience is unusual enough that it’s probably not a good place to visit for an important business meeting or a couple’s first date. But it’s definitely worth a visit, for a special occasion of its own. Especially if graduation is just around the corner. It would be a shame for someone to spend several years and tens of thousands of dollars on their college experience without a single meal at the most unique, most secret, most swanky spot in town.