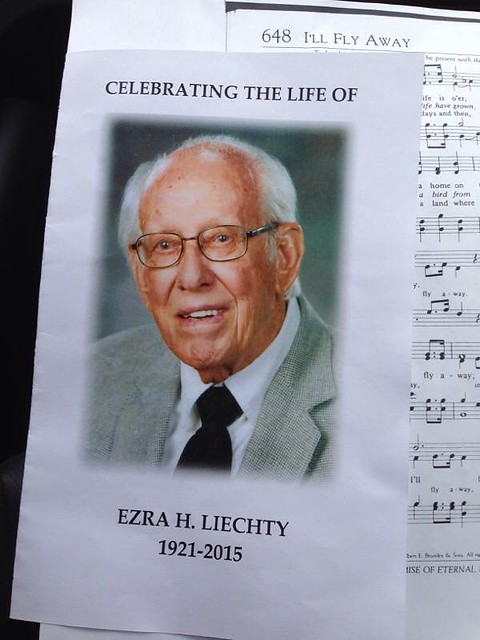 For those family and friends who would like to view a compilation of all the written material from yesterday’s funeral for my grandfather, Ezra H Liechty, an on-line document can be accessed with this link. This includes the eulogy, the personal tributes, and the sermon preached at the memorial service.

With that, I will conclude by sharing the full text of the eulogy, as written by my Aunt Jayne and read by my brother Jay:

Ezra loved the book of Ecclesiastes and often spoke of Chapter 3. “There is a time for everything, and a season for every activity under heaven: A time to be born and a time to die.” Ezra was the second born of seven children, born at his home on the farm near Brinsmade, ND. He was born March 8, 1921 and died on Valentine’s Day, three weeks short of his 94th birthday.

Verse 2 also says, “A time to plant and a time to harvest:” his Dad knew well. He was born to John and Clara Liechty who were farmers. All of the boys learned to work hard at a very young age, milking cows and doing chores before and after school. Dad felt that learning to work hard served him well for his future as a farmer and then as a developer of multi-family housing.

“A time to kill and a time to heal, a time to tear down and a time to build, a time to weep and a time to laugh:” Ezra went to North Central Bible College where he met his beloved Marguerite. He was convinced that she loved him because he had a great car. They married in 1944 and nine-and-a-half months later, along came Carol Margaret. Several years later their only son was born, Wayne Peter, followed soon by Jayne Clara and Janet Kay.

They were wonderful and perfect children. But verse 4 continues that “There is a time to mourn and a time to dance.” Their son Wayne died at the age of 29, and Carol died at the age of 53. Seven years later their son-in-law Arlen died. And the most difficult loss was when Marguerite died in 2010, at the age of 88. They were an amazing source of strength for each other. We found a note that Ezra wrote the day after Carol died; he titled it, “Reasoning Life.” In it he set his course for the rest of his life:

“As I wonder about the future, I pause to quickly reflect and confess that I know nothing as to why God permits those who are so precious and wonderful to us to be taken home to heaven early in life. And this I cannot change.

But, I believe, from a life of experience of the past that I have no other choice but to continue what God has given me to do on earth, until it’s my time to go. I now make that decision. Until I have obvious reasons to change, I will continue to pray, work, build, love, be caring, and in general, continue the path I have been going on for many years. This is what my precious loved ones have done until the time they have gone on before me and I respect that of them.

I know I will weep a lot, but I will weep in their honor. I will plant flowers and honor them in any way I know how, because they have been precious to me. I will try hard to be such a person that I can be, of honor to them. I know I will fail at times, but I will ask forgiveness of our Lord and go on, until my own race is run.”

Verse 5 goes on to say, “A time to scatter stones and a time to gather them, a time to embrace and a time to refrain; a time to search and a time to give up:” This speaks to Ezra’s wisdom, understanding, generosity, and forgiving spirit. Dad so often took the high road.

“A time to keep and a time to throw away; a time to tear and a time to mend; a time to be silent and a time to speak.” In recent years Ezra’s eyes and ears failed him, and he got much quieter — unless you could talk about growing up with his brothers, the Dust Bowl and the Depression, fishing and farming. He always expressed his gratitude for his wife, his warm home, good food, great care, and his Savior.

“A time to love and a time to hate; a time for war and a time for peace. What does the worker gain from his toil? I have seen the burden God has laid on men. He has made everything beautiful in its time. He has also set eternity in the hearts of men; yet they cannot fathom what God has done from beginning to end. I know that there is nothing better for men than to be happy and do good while they live. That everyone may eat and drink, and find satisfaction in all his toil — this is the gift of God.”

This entry was posted in Family, Recommended Reading. Bookmark the permalink.