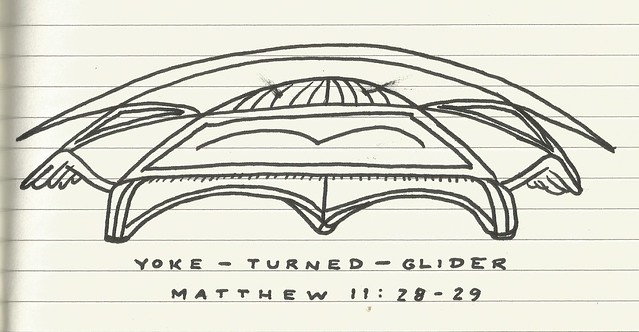 I resented the belts, buckles, and straps. I was embittered by the heavy equipment on my back, and I detested the steep incline I had to traverse to get to the meeting point. I hated the physics of it all — the heat of muscular exertion, the weight of gravity pulling me down, the friction of the gear digging into my shoulders — and I didn’t appreciate being made to feel like a dumb pack animal, although the grunt that escaped my mouth at the end of the journey was not unlike that of a mule or ox.

“Come to me,” said the instructor.

Could he not see my weariness?!? Did he not observe the heavy burden that I had clearly been carrying just moments before?!? I felt like I couldn’t move another step. I was melting into a puddle of sweat and exhaustion. But something in the instructor’s tone suggested rest and reassurance, so I staggered forward to him and dropped to the ground at his feet.

He helped me untangle myself from the equipment I’d been carrying, and I sprawled out like a wounded soldier giving himself up for death or detainment. The instructor smiled at my flagrant surrender and immediately proceeded to assemble some sort of wide, unwieldy contraption: using parts from my pack and parts from his own pack. His deft fingers worked quickly. He offered to teach me, as he worked, but in my exhaustion I could barely process a word of what he was saying. The only memory from the conversation that remained with me afterwards was his tone: humble, gentle, soothing.

It didn’t take long for the instructor to finish his work. Then I was pulled back on my feet: getting fitted with belts, buckles, and straps again. The ox being refitted for his yoke. A part of me wanted to protest: “Not the straps again! I can’t move a muscle!” But another part of me knew that cooperation was the best option. The expert fingers of the instructor did their work effortlessly and skillfully.

“Mm-hm…Fits perfectly…” he said, partly to himself and partly to me. His eyes checked every part of the equipment. And his hands kept adjusting the straps, like fluttering birds, the touch of his fingers so light it was almost like a massage. The straps didn’t dig in at all this time. The laws of gravity seemed to have shifted, and I actually felt buoyant. Once the instructor seemed satisfied that all my equipment was properly prepared, he finished strapping himself in right next to me and then lifted his face to sense the direction and velocity of the wind.

I asked, “Is it going to hurt?” I was worried again about my sore muscles and pack sores. Obviously, the situation was entirely different than it had been on my climb up the mountain — but still I worried about all those belts and buckles and straps.

He assured me that we were in for a restful, refreshing experience. “The burden I give you is light,” he said. And with that the wind filled the fabric of the glider over our heads and we pushed ourselves out into the void — drifting towards the sunset in one of the happiest endings I could have ever imagined for myself.

This entry was posted in God, Introspection, The Bible, Writing. Bookmark the permalink.