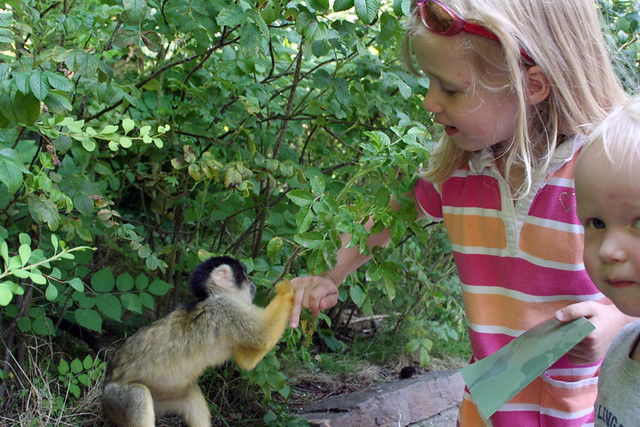 One day when I was six, me and my family woke up, got dressed, ate breakfast, and hopped in the car to drive to the monkey zoo. The monkey zoo is a cool zoo but is only for monkeys. You see at that time I lived in Netherlands, but that’s another story.

Okay, when we got there we roamed around for awhile. Then we went to the squirrel monkey section. Squirrel monkeys are, of course, monkeys, but these ones are really cute monkeys and they are little and they are yellow and black. Well, my Dad let a squirrel monkey hold his finger because you were allowed to. And there were rangers there, and the whole zoo was fenced in so the monkeys couldn’t run away. Well I look up to my Dad. So I let a monkey hold my finger. The monkey looked at my finger like it was some kind of cupcake. It looked at it for a minute or two longer.

Then I guess I held it for too long because it bit me. “Ow!” I said. My finger felt like I stuck it in an oven. A lady saw the monkey had bit me and felt bad for me. And she showed us where they made monkey food. Then I got a band-aid. After that we went to the gift shop. We got a stuffed squirrel monkey and named it Chompers after the monkey that bit me. Then after a little while I felt better.

The above account was written by my daughter, Olivia, for a school assignment this week. In case you’re interested in hearing a version of the story from my (Eric’s) perspective, you can find a piece entitled Experiencing the Dutch Institutions of Summer in the 2009 Archives.

This entry was posted in Children, Family, Nostalgia, Recreation, The Netherlands, Writing. Bookmark the permalink.