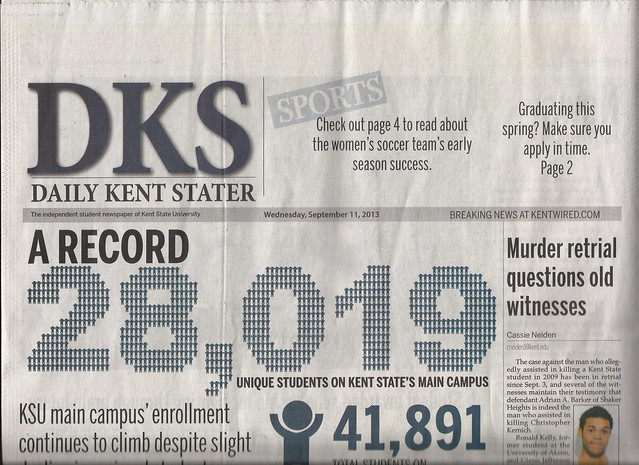 Kent State University published its enrollment figures yesterday. I thought it would be interesting to list some of the noteworthy figures here. I personally find it interesting to track these sorts of figures because it helps me to better understand the “mission field” in which I’m working as a “missionary” on campus.

In terms of students at the main campus of Kent State University (not counting extension sites), there are 28,019 students registered this year. That’s a record.

Setting another record, this year’s first-year students comprise the largest freshman class in the 103 years of Kent State’s existence.

The Daily Kent Stater did not actually publish this figure, but they did say that this year’s enrollment of international students was up by 10.37% from last year. To get the number listed above, thus, I had to use last year’s enrollment figures multiplied by 1.1037.

Other facts and figures were quoted — such as retention rates, the number of applications received, and the freshman class’s average grade point average — but the only other figure I wish they had published was how Kent State enrollment figures rank compared to other Ohio universities. In any event, I’m challenged and encouraged to consider the strategic ministry opportunities represented by these numbers.