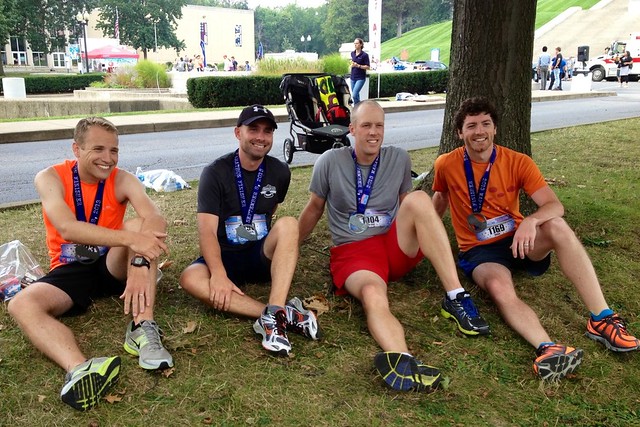 We did it! My friends (Mark, Jason, Aidan) and I completed the Hall of Fame City Challenge Marathon in Canton, Ohio, this morning. I will probably post more about the experience later — but just to provide a quick report: my marathon experience broke down into three very distinct (and roughly equidistant) thirds.

The first third of the race was awesome. I felt strong. I was having fun. My friends and I were all able to stick together. The miles went smoothly.

The second third of the race was more challenging, but I was able to hang in there. The pace stayed on target. I started feeling a very heavy feeling in the pit of my stomach, but I plodded along. Our group stayed intact until somewhere past Mile 17. It was tough, but I figured hey — marathons are supposed to be tough.

The final third of the race, however, was awful. Hellish, even. At turns, I felt nauseated, faint-headed, and extremely heavy-legged. Several times, I had to quit running and walk (and even at that, I wasn’t sure I was going to be able to finish). Aidan and Jason had fresher legs, so they finished together in 3 hours and 55 minutes. Mark — God bless him — stuck with me (partly because of his own physical state at that point, but mostly out of compassion for me), and we finished together in 4 hours and 19 minutes.

So in the end, I achieved the main goal of running this marathon: Finishing. But I failed to achieve my second- and third-tier goals of finishing under 4 hours and/or finishing with a total average pace under 9 minutes per mile (all of which seemed like fairly reasonable goals coming into the race). So I have some mixed feelings about the whole experience. But I’m very glad to be on the other side of it now, and I feel much better following a bit of rest and food.

This entry was posted in Recreation, Running, Sports. Bookmark the permalink.