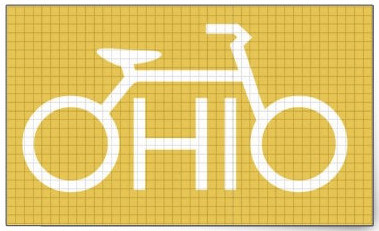 I like bicycling because it’s efficient. Certainly within town (and even between neighboring communities), a bicycle can often beat an automobile when it comes to getting from Point A to Point B. “Parking” is much easier. Furthermore, converting food into energy, bicycling provides simultaneous benefits for fitness and transportation. What’s not to like with these efficiency benefits?!?

I like bicycling because it costs me so little. When I use a bicycle as my primary mode of transportation, I don’t have to pay for fuel outside of the food that I’m already eating anyway. Insurance payments, parking permits, traffic tickets — I don’t have to pay any of these, when I use two-wheeled transportation! Most repairs and maintenance (infrequent though they may be, with so few moving parts) can be resolved for $20 to $30. A “really expensive” repair is, like, $100. Compared to automotive transport, bicycling is remarkably inexpensive.

I like bicycling because it costs others so little. Some might be inclined to think that I’m always trying to make a statement with my bicycling. Like I’m playing the part of of a prophet: decrying pollution or technology or a perceived lack of social connection. But these are really just very small fringe benefits, in my own mind, when it comes to why I like bicycling. That being said, these fringe benefits are worth celebrating, too! I appreciate the fact that bicycling is a zero-emission source of transportation. I appreciate the way that fewer natural resources are required to manufacture a bicycle, as opposed to an automobile. I appreciate the way that bicycling allows me to make eye contact (and sometimes even a smile, a wave, a word of greeting) with pedestrians and joggers and children playing beside the road — in a way that’s just not possible with automotive transport. I guess some drivers might be annoyed by me bicycling on the area’s roadways, feeling that it slows them down or presents safety risks, but in my experience the cost of my bicycling on the rest of society is very minimal.

I like bicycling because it connects me to my world. And when I really think about it, I honestly believe that this is one of the greatest reasons why I like bicycling. I like knowing which direction the wind is blowing on a given day. I like being able to hear the sound of leaves rustling in the fall, birds chirping in the spring — and yes, I even like experiencing the chill of winter. I feel like I’m more perceptive to the passing of time and the changing of seasons when I’m hovering just a few inches above the ground on my bicycle, exposed to the elements. I like knowing the rise and run of the landscape around me, really feeling it on hard climbs or long coasts down to the river bottoms. I like going a little more slowly, so I can notice things. I like the way bicycling exposes me to the wider world, rather than isolating or insulating me.

I like bicycling because it’s different. Truth be told, I like holding onto a certain degree of idealism and Old World charm. I like the way that bicycling — especially on an old Amsterdam opafiets — makes me distinct from the other people around me. I don’t expect bicycling to ever displace the automobile, at the heart of the American transportation system. We’re just too spread out for that. The infrastructure makes it clear that I’ll always be a little bit unusual with my preference for bicycling. At the same time, though, I wouldn’t mind it if others started to embrace the advantages of bicycling wherever and whenever possible. There’s just something to bicycling that’s hard not to like.

This entry was posted in Bicycling, Culture, Introspection, Recreation. Bookmark the permalink.