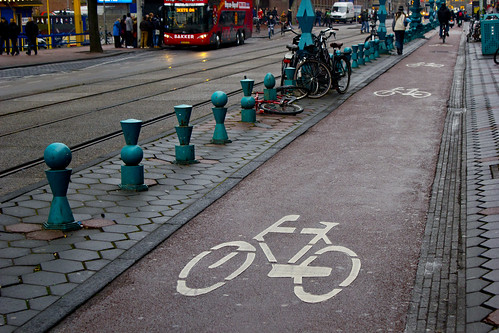 Over the last decade of living in Amsterdam, the bicycle has become my preferred mode of transportation. In short, I’ve discovered that bicycling is economical, ecological, efficient, healthy, and fun. Here in Amsterdam, 90 percent of my transportation needs can be met by bicycle (and public transportation can fill in much of the rest). So in truth, I’ve come to enjoy life without automobiles.

Now, however, I’m moving to the United States.

In the United States, people have no problem with bicycles — but at least when I left ten years ago, it would be more likely classified as a “hobby” than a “mode of transportation.” That is, it’s something that is done on the weekends. It’s done on bicycle trails. Daily bicycling is done by an enthusiastic core of die-hards, not “normal folks.” For everday transportation needs in the United States, the car is king. Roads rarely have bicycle lanes. Many times, the structure of curbs and multi-lane intersections makes it dangerous if not downright impossible to get around in anything smaller than a Volkswagen Beetle. Working, shopping, going out… it’s all done by car.

I’ve conceded the fact that our family will need at least one reliable automobile (probably a mini-van) to effectively function in Ohio. There really is no other way to get between Kent (where we’ll be living and working) and, say, my parents’ house in Shelby. The family vehicle will also be necessary to get groceries, take vacations, and generally get the kids from place to place. That’s just the way it’s going to be (like it or not). But here’s what I’m wondering:

Is it realistic for a young and active family of five to manage daily existence in Northeast Ohio with a single automobile?

I know that the question may seem ludicrous to some. Europeans may laugh at the perceived excess of such a question; Americans may laugh at the assumed impracticality. But I’m genuinely wondering here. How realistic would it be for me to get around Kent (and the surrounding communities) with an imported opafiets from Amsterdam? It’s the heavy-duty, sitting-upright sort of bicycle that everyday Amsterdammers use. It’s equipped with saddle bags and a luggage rack that can carry a reasonable amount of stuff. Variations on the idea could complement the “transportation package” with the bus system — or possibly sharing a vehicle with someone else. But I’m wondering: How practical would this be? How safe? How would it be perceived, socially / culturally? What would be my biggest challenges in getting around this way?

I would greatly appreciate whatever candor and clarity others might be able to bring to the situation. I’m not an idealist trying to make some kind of statement. I’m just trying to figure it out on the practical level. What do you think?