So we’re at the Keizersrace, watching heat after heat of head-to-head speed-skating on natural ice in the heart of Old Amsterdam. The temperatures are well below freezing, but we’re in high spirits together with 10,000 other Amsterdammers. It’s a massive celebration of Amsterdam and the Classic Dutch Winter with people crammed along the sides of the canals, crowded up on raised stoops, and hanging out of windows overlooking the scene. A local celebrity serves as commentator for the races. In between heats old-school music, featuring accordians, organs, and the deep-throated warblings of Johnny Jordaan and Tante Leen, rings out from every side. The whole scene is lit up like a Christmas tree, with a dozen television cameras covering the event, complemented by thousands of amateur documentarians holding up their iPhones and Androids to take in the action. 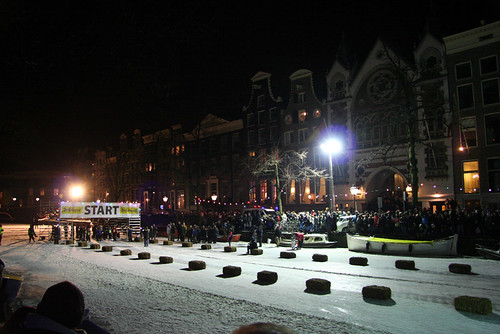 The boys, the girls, and the women have all completed their races. The Keizer and Keizerin (Emperor and Empress) have been crowned for each class except the men, who are warming up with laps around the 160-meter race-track, situated between the Nieuwe Spiegelstraat and the Leidsestraat. I keep looking across the canal, off to the sides, and behind me, trying to get a visual on my friend Jim, who left our party some fifteen or twenty minutes ago with ice-hockey skates slung over his shoulder, determined to see if he could somehow finagle a last-minute registration for the race. I told him it would be impossible; after all, we had tried calling some 30 or 40 times during the open registration window on Thursday night — and even when we finally got through on Friday morning, we were specifically lectured that there was no way for him to get into a race that was already overflowing with registrants eager for their chance at the crown that had not been up for grabs since 1997. Still Jim thought he had a chance to sweet-talk his way into the race. And as the time of his absence grew to half an hour, I was starting to wonder if he had managed to do just that. 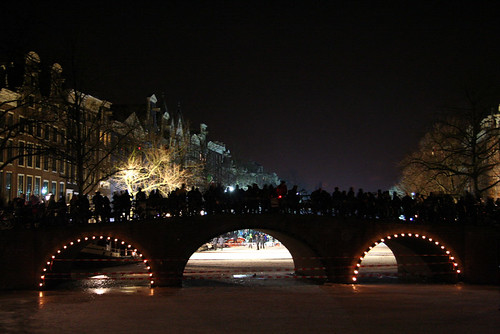 “The Poorman Powers of Persuasion” are truly a wonder to behold. I’ve known Jim for over fifteen years, and I’ve seen it in full effect on several different occasions. He’s figured out ways to get us into jam-packed, sold-out concerts and sporting events. He’s worked his magic to gain access to back-stage areas and personal encounters with numerous celebrities. He’s garnered unprecedented favors from airline officials, waitresses, and hotel managers. He’s managed to buy items that were absolutely, positively not for sale; and he’s managed to sell items that were absolutely, positively not sell-able. Marci and I started kidding Jim and Allison about “the Poorman Schmooze” several years ago (though we’ve more recently rebranded it as “the Poorman Powers of Persuasion” to eliminate the slightly-negative, scuzzy, manipulative suggestion from the terminology). But even though it started as a joke, it’s a well-documented — albeit somewhat inexplicable — phenomenon. They just ask the questions that no one else dares to ask, and they find themselves frequently rewarded for their friendly finagling and pleasant persistence. That being said: I still find it inconceivable that the Poorman Powers of Persuasion might actually go so far as to grant him last-minute admission into the prestigious Keizersrace.

And then I see Jim out on the ice, warming up for the race.

When he eventually digs in at the starting line, the announcer says (in Dutch that would be incomprehensible to Jim himself), “We actually have an international participant in Lane #1, wearing #51, which I didn’t realize at first. Yes, we have an American guy from Florida. So Amsterdam, let’s give an extra round of applause for Jim Poorman!” The crowd roars its welcome, and the announcer continues. “He was here visiting friends in Amsterdam this week. He brought his skates along with him, and he asked if he could join the race, and we thought, ‘OK, why not?’ So we went ahead and let him join the race. So… gentlemen, to the line… Ready… Go!” Half-way up the track, the announcer switches to English and calls out the rest of the play-by-play in Jim’s native language. We’re screaming our heads off the whole way. Other friends are watching the action on television and texting their astonishment. The whole crowd is cheering my friend in the Keizersrace. They’re cheering him onwards, onwards, onwards, clattering up the ice in his hockey skates against a competitor in full bodysuit and long-bladed speed skates.

He ends up losing his heat by ten or fifteen meters… But his showing is nevertheless legendary.

This entry was posted in Amsterdam, Recreation, Sports, The Netherlands, Traditions, Video, Weather. Bookmark the permalink.