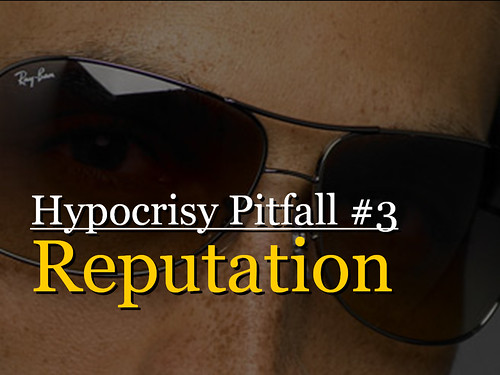 “Reputation” is a very interesting concept to me.  It seems to be different from culture to culture, and from one historical time period to the next.  In our culture, it might be like being considered “cool.”  But it’s more than this, too.  It’s all about the ideas of respect, honor, and having other people think well of us.  It’s one of the most natural traps for practicing hypocrisy:  wearing masks that make it difficult to sort out truth from fiction.

Honor was very important back in the time of Jesus and the Pharisees (as it still is in most Eastern cultures).  I would venture a guess to say that one of the main advantages to being a Pharisee in those days was gaining a good reputation in the community — being naturally considered to be respectable, moral, and learned.  Jesus, however, was not so impressed by the reputation of the Pharisees.  He actually said, “What sorrow awaits you Pharisees! For you love to sit in the seats of honor in the synagogues and receive respectful greetings as you walk in the marketplaces.  Yes, what sorrow awaits you! For you are like hidden graves in a field. People walk over them without knowing the corruption they are stepping on” (Luke 11:43-44).  Basically, if anyone looks “too good to be true,” he probably is.  We’re all sinners, who have all fallen short of the glory of God.  Of course, there is hope for regeneration and renewal… but we’ll never be perfect.  We need to be careful not to let our reputations get ahead of us, lest we become hypocrites.

It’s funny.  For me, you’d think that my problems with this would be most obvious in ministry settings, since I am “the pastor” and involved in full-time ministry.  But our culture doesn’t seem to care about ecclesial responsibility too much these days, so this is less of a temptation for me than it would have been for the Pharisees.  No, for me, my main struggles with this are in the areas of “career” and “accomplishments.”  The best example of this conflict comes with my writing group.  I’ve been a part of the group for almost two years now, and the other members of the group have become great friends… But they still intimidate me sometimes!  They’re all way more educated than me (several with multiple degrees from elite Ivy League schools).  They all make way more money than me (not as writers, but as business people in their “day jobs”).  And they all seem to be way more cultured — and especially more well-read — than I am!  They seem to devour 10 to 20 books a month and are very adept at discussing the various works that are out there.  But even though I’m nowhere near their league, when I’m with the others from my writing group I can feel very tempted to try and pretend like I’m the same as them.  I talk about myself as being the “director” of a “non-profit” (which is correct, but perhaps misleading when it comes to figuring out what I actually do).  I pretend like I know the books that they’re discussing amongst themselves, even if I’ve only ever heard a title or something (and I happen to get through an average of one or two books per month).  I use my choicest vocabulary when I’m with them… I’m sure you get the picture.

But the truth of the matter is that I’m a pretty regular guy, who went to a very mediocre university, who pastors a church and just tries to squeeze in a bit of reading and writing for fun, whenever I can!

Maybe this scenario doesn’t sound too hypocritical to you.  But I know my heart, and I know that I’ve got issues here!  That’s where I need to remind myself that the antidote to hypocrisy in the area of reputation is to find one’s identity in Jesus (not in external circumstances or cultural codes).  Luke 12:8-9 says it beautifully:  “I tell you the truth, everyone who acknowledges me publicly here on earth, the Son of Man will also acknowledge in the presence of God’s angels.  But anyone who denies me here on earth will be denied before God’s angels.”

Now, I’ve never been one to deny Jesus.  But I haven’t exactly been deliberately acknowledging either.  I’m learning.  I’m growing… so help me, God!

This entry was posted in God, Hypocrisy, Introspection, Preaching, Social Issues, The Bible. Bookmark the permalink.