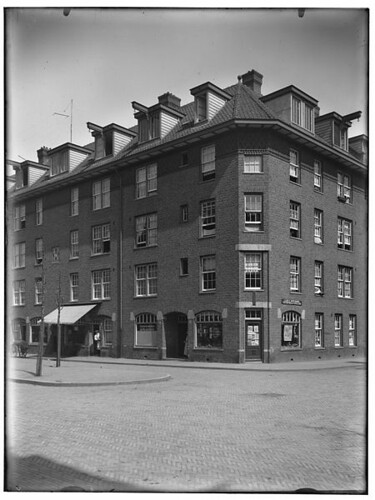 The Transvaalbuurt (named after people and places from the Netherlands’ colonial history in South Africa) is geographically defined by a canal (the Ringvaart) to the south, a set of train tracks (running from the Amstel Station to the Muiderpoortstation) to the north, and one major street (the Linnaeusstraat) on the east and another (the Wibautstraat) on the west. It was originally developed around the turn of the 20th Century — and it became a major resettling point for the city’s Jewish population, after the original Joodse buurt (Jewish neighborhood) near the Waterlooplein had become a slum, being so run-down as to pose a significant health hazard. Not only were the original inhabitants of the Transvaalbuurt predominantly Jewish — they were also socialists, serving as members and major advocates of the trade unions (especially the Federation of Diamond Workers) and idealistic crusaders for a new kind of government in the Netherlands.

Businesses were incorporated. Schools were established. A large synagogue, with room for 500 worshipers, was erected on the Linnaeusstraat — approximately where our local police station is now located and where we now shop for soap, shampoo, and toiletries at the local Etos. In the early boom years of the Transvaalbuurt, dozens of various shops were opened, catering to the local clientele. Right across the street from where we now live was a store specializing in the sale of books, party supplies, and toys, and next to it was a cigar factory (these can be seen in the photograph above, dating from 1932). And though we don’t know exactly what our apartment would have been used for back in those early days (apart from the fact that its zoning was only recently changed from being a “Winkelhuis” or “Shop-house”), it’s not hard to imagine that it could have been a little Mom-and-Pop kosher grocery store or something like that (especially if you look at our place from the outside). It’s interesting to think what the neighborhood would have been like back in those days.

Well, as you can probably imagine, in a neighborhood full of Jews and Socialists, the Transvaalbuurt was dramatically and tragically transformed halfway through the 20th Century, during the years when Amsterdam was occupied by Nazi Germany. Because the neighborhood already had such a high concentration of Jewish people — and because the natural barriers formed by the elevated train line on the north and the long canal on the south which allowed the area to be easily policed — the Nazis systematically funneled large numbers of Jews from around the city and the surrounding countryside into the Transvaalbuurt. By the spring of 1943, the neighborhood had truly become a Jewish ghetto. 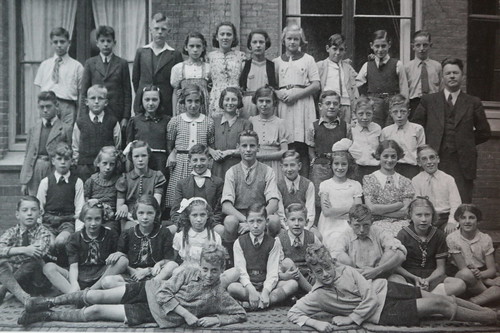 Then, on the evening of June 20, 1943, the neighborhood experienced what must have truly been one of its darkest hours. The occupying army completely sealed off the neighborhood and drove through the streets in trucks with loudspeakers announcing that the residents of the neighborhood must wait outside the front doors of their homes with their prescribed limit of baggage until the time that they would be picked up. Then between eight o’clock and nine o’clock that evening, the neighborhood was systematically emptied, as the German Joodse Ordedienst loaded the residents of the Transvaalbuurt up in large freight trucks and then drove them to the nearby Muiderpoortstation, where they got on trains that took them to the Westerbork concentration camp, where the vast majority of the former residents of the Transvaalbuurt were annihilated. 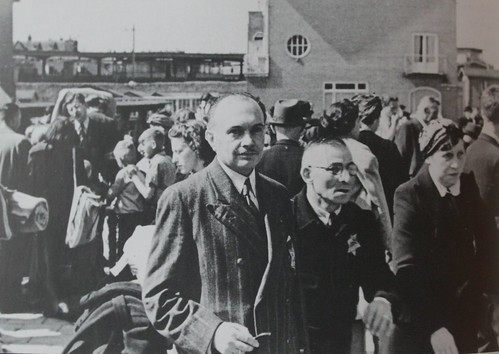 By the end of the Second World War, 93 percent of the Dutch Jewish population was eradicated. And certainly, the Transvaalbuurt was never the same again. During the final, most brutal years of World War II, the Transvaalbuurt was naturally something of a ghost town — which made it prime hunting grounds for increasingly cold and hungry Amsterdammers to seek firewood and whatever kind of food items might be scrounged. Entire rows of houses within the Transvaalbuurt eventually collapsed after being structurally weakened by the removal of their wooden skeletons for firewood. The effect of the War on the Transvaalbuurt was absolutely catastrophic.

And yet, in the years since the end of the Second World War, the Transvaalbuurt has come back. The neighborhood’s 38 hectares (0.15 square miles) are now home to approximately 10,000 people (this is amazing to me, as my old hometown in Ohio holds approximately the same population in roughly 35 times the area!). The neighborhood apparently has one of Amsterdam’s highest concentrations of young children (which, I guess, is pretty evident if one ever visits one of the many area playgrounds). As in the Transvaalbuurt’s earliest days, the large majority of the neighborhood’s population (64%) is — like me — not of Dutch descent. However, instead of Jewish people, the neighborhood mens’ tunics and ladies’ headscarves would seem to suggest that many of these “foreigners” are cultural Muslims from Turkey and Morrocco (in fact, I’ve heard an unconfirmed report that our street is home to the world’s highest concentration of Berbers outside of Morrocco!). We do our shopping at a grocery store that is staffed almost entirely by people of Indian (or perhaps Pakistani) descent. The local butcher shop is owned by two brothers who are as Dutch as can be — though their shop advertises itself as being a French butcher. For fruits and vegetables, we frequent the Turkish market close to our house. There’s a video store around the corner that specializes in Bollywood films. And a bit further down the road, there are Caribbean snack shops right next to hair salons specializing in hair straightening. It’s quite the amazing neighborhood to me.

But what’s most amazing of all is that it has become home to me and my family. We’ve developed familiarity with the shop-owners, who give us advice about how to best use their products. We trade greetings with the Brazilian Capoeira crew that hangs around outside with our neighbors. We rejoice with the Dutch / Polish neighbor couple on the other side, who is expecting their first baby this winter. And we now can even call ourselves property owners here in the Transvaalbuurt! Who would have thought it possible?

But it is possible. It’s here and now. It’s our neighborhood. It’s our home.

This entry was posted in Amsterdam, Dutch Politics, The Netherlands, Uncategorized. Bookmark the permalink.