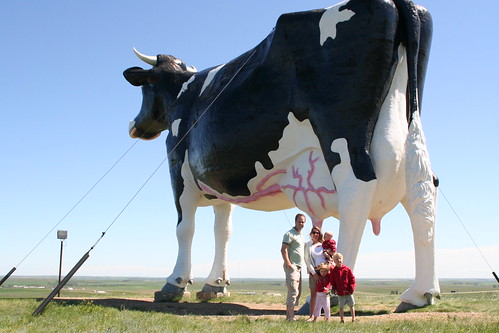 A day after visiting the World’s Largest Buffalo, our family took to the road again — pushing further west into the western Dakotas — and on the way, we were privileged with the chance to see the World’s Largest Holstein Cow (in New Salem, North Dakota).

The Cow wasn’t a planned stop, but when we pulled over for a fuel stop in New Salem, we were greeted with signs to "Enjoy the view from Salem Sue!" — and we could hardly resist the opportunity.  Indeed, when we made it to the top of the hill on which the World’s Largest Holstein Cow sits, we were rewarded with an incredible view — of Salem Sue, and of the surrounding Great Plains.  From Sue’s perch we could see dozens of miles in every direction.  It was butte-i-ful (sorry, I couldn’t resist the pun).  Salem Sue is the stuff that road trips are made of; it may just have been the highlight of our trip up to this point.

Then, after seeing Salem Sue, we drove.  And drove.  And drove.  For hours, we just rolled through the grasslands that impressed me with their vastness and wild (albeit a bit monotonous) beauty.  While driving, I saw wild elk, wild antelope, and — well, a lot of grass.  While driving through the Great Plains, it’s also easy to see why they call it "Big Sky Country."  The picture snapped through the tinted-glass, bug-stained front windshield of our minivan hardly does it justice… But it gives you a bit of an idea. 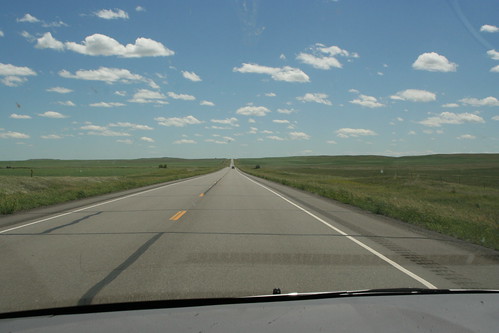 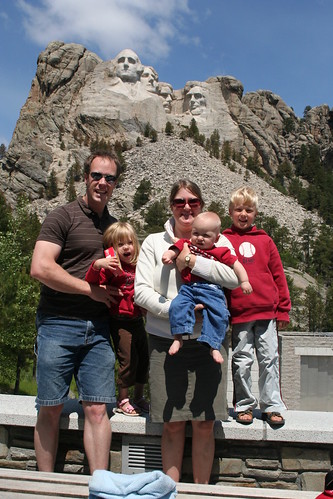 It was pretty cool to be able to see it with our own eyes.  Our kids really enjoyed the chance to roam around the park and complete assignments for their "Junior Park Ranger Badges." 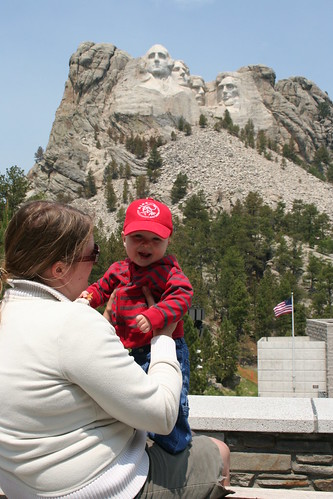 But even more than Mount Rushmore, the kids enjoyed the chance to visit "Bear Country USA."  Which is kind of a classic tourist trap, cheesy "rustic Americana" stuff — but also kind of cool, as you can get up close and personal with some North American wildlife.  The picture below, by the way, is not a photograph of the "wildlife" (there really were actual flesh-and-blood black bears, grizzly bears, mountain lions, wolves, buffalo, elk, and such), but I love the picture for its moment-in-time quality:  Elliot grinning broadly and bravely next to the ranger bear mascot and Olivia standing suspicious, a foot-and-a-half away, head turned toward the preceived threat… Classic stuff. 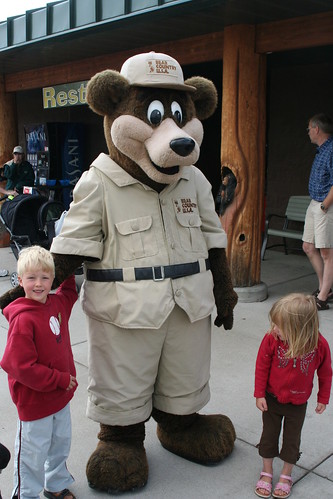 We’re having a great road trip.  I wish I could write more now, but I’ve gotta go… This afternoon, we’re back on the road, enjoying some of that Great Big Sky over the Great Plains.