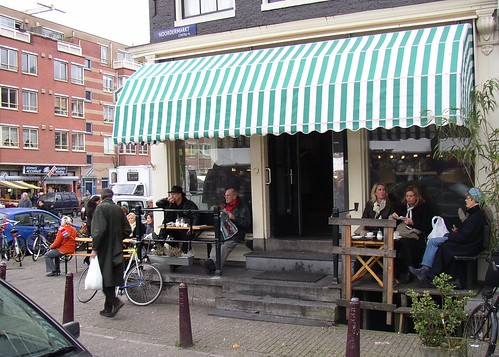 Would you believe that the above photograph was taken in the middle of January?  Seriously.  And it wasn’t just some "heat wave" in the dead of the winter.  In fact, this scene can be observed almost any time of the year — at the end of the Westerstraat, where it empties into the Noordermarkt.  Amsterdammers bundled up in overcoats and a scarves, gripping steaming cups of koffie verkeerd like shields to ward off the chilly and damp Dutch air… at least long enough to enjoy a piece of the city’s best appeltaart.  They do it because they know it’s worth it.  It’s that good.

I must confess that I’ve become a bit of a connosieur when it comes to echte Hollandse appeltaart (real Dutch apple pie).  It’s one of those items that makes its way onto just about every cafe menu in the country — yet no two recipes for appeltaart seem to be exactly the same.  And since my job routinely involves conversation over a "cup of coffee" in one of the thousands of cafes around the city of Amsterdam, I’ve sampled a fair share of the appeltaart offerings in the city.  Though I’m always open to considering new possibilities, by this point I believe I’ve truly zeroed in on the best appeltaart in the city of Amsterdam…

Make no mistake about it:  the best appeltaart in Amsterdam can be found at the Cafe Winkel — best served met slagroom (with whipped cream) and een kopje koffie verkeerd (cafe au lait).

I first discovered the place when I was living on the Westerstraat at the beginning of my life in Amsterdam, about four years ago.  Whenever I’d walk by Cafe Winkel, I noticed consistent crowds:  inside or outside the cafe, weekday or weekend, rain or shine… And I noticed that perhaps seventy-five percent of the patrons of the cafe always seemed to have a big fat slice of appeltaart alongside their coffee or tea or whatever.  One day, I stopped in to try the experience for myself; to say the least, I was amazed by what I discovered.  Not exagerating, the cafe seems to go through six to eight full, round, fresh-baked taarts (about the circumference of a large pizza) every hour.  Thus, as you might be able to imagine (can’t you just smell it and taste it now?), the appeltaart is always fresh, always warm, and always delicious.  And even if the taart was cooled and a few hours old, it would still be among the most flavorful and delightful of any in Amsterdam:  chock full of real, sweet, soft chunks of apple (which, believe it or not, is not always the case with appeltaart from other places), encased by a nice crusted cake-like taart, with just the right amount of sweetness and texture… Seriously, this appeltaart is amazing.

And it’s stood the test of time.  I’ve been living in another neighborhood for almost four years now.  I’ve tried appeltaart from dozens (if not hundreds) of other establishments across the city.  And I have yet to run into another experience on par with appeltaart-met-slagroom en koffie verkeerd at the Cafe Winkel.

Still, if anyone out there has other suggestions or recommendations, please let your opinion be known!  There are certainly a few other places in Amsterdam that deserve honorable mention:  Taart van m’n Tante in De Pijp… Espressofabriek in the Westergasfabriek… and even Cafe Toussaint, just around the corner from the old Zolder in Oud West… Maybe there are others that I just haven’t tried yet.

But I’m thinking it’s going to be pretty tough to beat appeltaart from the Cafe Winkel.