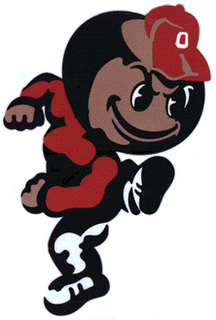 There was a big football game in Ohio yesterday: the Ohio State University Buckeyes (representing the biggest school in my home state, with a proud athletic tradition) against the Bowling Green State University Falcons (representing the more humble university from which I happened to graduate seven years ago). Not surprisingly, the Buckeyes won pretty easily. However, I found myself somewhat surprised by my reaction to the public humiliation of my alma mater.

And in such a response to yesterday’s game, I realize that I have come full-circle in my sense of identity and affiliation. Four years after my departure from Ohio — and almost twenty years after initially moving to the state — I can now proudly call myself a Buckeye. I know this may not mean much at first glance — particularly not in the context of sports — but I know that for me, it’s a significant step.

You see, I moved to Ohio when I was ten years old. The state of Wisconsin had been my home for a vast portion (eight years) of my young life — and when I moved to Ohio it was, well, a pretty big transition. I had to adjust to a lot of new people and new places. I had to break into new circles and find new ways of being part of the crowd, while simultaneously maintaining my fragile sense of pre-adolescent self. And while I’m sure that this process of assimilation took many different forms, it seemed that sports affiliations became one of the most obvious — because that’s what ten-year-old boys in America are into… because athletic competition draws such clear and colorful lines between different geographic regions…. and because Ohioans are especially obsessed with sports.

So somehow it delineated me and defined me to enthusiastically embrace the Twins and Vikings and Gophers (all teams from the northern Midwest) — and to vehemently scorn the Indians and Browns and Buckeyes of Ohio. Every week — particularly during football season — I would delight in each win by my (northern Midwest) teams… and I would delight even more in each loss by the Ohio teams. Compounded, if the Vikings could beat the Browns, or if the Gophers could beat the Buckeyes — I would be ecstatic, proudly wearing Minnesota team jerseys and T-shirts at school every day of the following week and claiming “bragging rights” over all of my devestated Ohioan friends. But conversely, if the Vikings somehow lost to the Browns, or if the Gophers ended up getting beaten by the Buckeyes — I would be devestated, trying to find excuses not to go to school the following Monday, dreading the ridicule of friends exercising their “bragging rights” over me. Yes, it was juvenile. Yes, it was silly. Yes, it’s kind of embarrassing to remember what a huge role sports played at that stage in my life.

But fortunately, I mellowed out through the second half of my teenage years. Over time, I downgraded my passionate hatred of Ohio sports teams to a moderate dislike, and eventually to a comfortable ambivalence. I would still favor my northern Midwest teams in head-to-head match-ups with Ohio teams — but as long as they weren’t directly opposed to each other, I could be OK with the success of the Browns, the Buckeyes, and the Indians. In the mid 1990s, I actually caught myself cheering for the Indians during the playoffs (not against the Twins, mind you, but still it was a big step forward). Still, cheering for the Ohio State University football team against my Bowling Green State University football team is a new phenomenon. I remember during my university days, I was baffled by my fellow students who were more than willing to forget about “being true to your school” and who would choose to support the big bad “enemy” instead…

Affinity for the Ohio State Buckeyes is a regional identity — larger and more basic than the school from which one’s diploma is obtained. It falls more in the same categories as dialect and regional cuisine and ancient family feuds. Pretty much everyone in Ohio has some kind of connection to the Ohio State University (for me, I can now claim a more intimate connection through my brother Alex, who is a freshman at OSU). Thus, particularly when OSU is at the top of the national rankings, the status of our state’s football team is the affirmation of our worth to the rest of the country. Again, I know it sounds silly… but that seems to be the way that it works among Ohioans.

So perhaps you will chide me for jumping on a “bandwagon” (this was the ultimate insult among peers in my early adolescent years of sports obsession). But after a couple of decades in development, I figure it’s about time… And living abroad, in the Netherlands — where I can only describe Ohio as “a big state about half-way between New York and Chicago” — I don’t have the luxury of nuanced regional identity. I must embrace the realities encircling me. And I must say it: I’m proud to be a Buckeye.