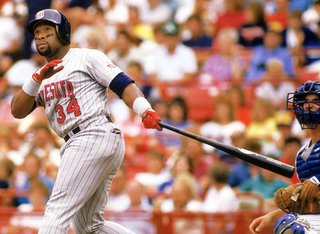 I raced through the parking lot to the waiting mini-van. A fourteen-year-old freshman in the high school marching band, I had been entirely preoccupied during the entire Thursday evening band practice, and I was so glad when it was over that evening. Jumping into the passenger seat next to my father, I immediately reached for the knob to the radio and tuned directly to WMAN 1400 — where I knew I could catch up on coverage of the World Series. This October fixture of America’s “national pasttime” featured a match-up between the best two teams in baseball: the Atlanta Braves, and my beloved Minnesota Twins. And I hung on every word from the announcer.

I followed baseball religiously in those days. Especially my favorite team: the Twins. And especially my favorite player: Kirby Puckett. My bedroom was covered with posters of the stocky centerfielder. A shoebox under my bed was filled with baseball cards featuring number 34. And the black Wilson baseball glove in the garage featured a well-worn “signature” by Kirby Puckett across the palm… My moods in those days of early adolescence were directly related to the baseball standings on the sports page of the Shelby Daily Globe. And fortunately that year, 1991, turned out to be a happy year for me. The Twins not only won their division, but they went on to capture the American League penant, and Kirby and the Gang kept me awake for seven breathless nights in that World Series. Trailing by three games to two in the best-of-seven series, it was none other than Kirby Puckett himself who rallied the Twins with a monumental performance in Game Six and uncorked the champagne following the final triumph in Game Seven. My memories of that autumn are as vivid and alive as any from my childhood.

But today, I feel a strange sense of loss to realize that my childhood sports hero — the great Kirby Puckett — has died, following a stroke. There’s a hole in the line-up. A void in the outfield… I’m sad. I’m grieving.

It’s illogical for a grown man to feel this way about someone whom I’ve never met personally — especially an athlete. His contribution to society was, in the end, less than significant: an entertainer, an icon, a pasttime… Yet in processing the death of Kirby Puckett, I realize that I am processing the death of a part of me. I realize that this is what it means to get older. To watch the transformation and tragedy of losing the people and things that have been meaningful through the years. To slowly be stripped of the symbols that are supposed to define us and to be brought back to the barrenness, nakedness, and vulnerability of infancy. It can be a sobering process — but it’s not unnatural, and it’s not to be avoided. It’s OK to mourn for Kirby. It’s OK to be affected by the loss. And it’s OK to move on, renewed in my understanding of my finity in the face of God’s greater infinity.