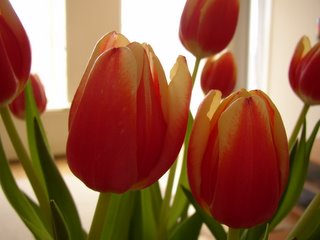 The last week of January 2003 was a cosmic week in my memory — a week of miracles and transformations and shock. Looking back, three years later, I can hardly believe that so much happened in such a short period of time. Like a wedding or a birth or a death, the recollection of that fateful week is a montage of disparate images — blurred emotion more than chronological record — and yet it is the recollection of an event that was truly significant, that trancends historical documentary. This week marks the three-year anniversary of our family’s move to Amsterdam.

In the third week of January 2003, we were still waiting (after almost half a year) for the sale of our house in Bowling Green. We were still sharing the story of the “Amsterdam Project” with anyone and everyone who would listen, hoping to build a base of financial support that would allow us to focus on full-time ministry in the Netherlands. And we were still wondering if we’d ever actually be boarding a plane across the Atlantic, to help build a new community of faith in central Amsterdam…

Yet by the first week of February 2003, our American automobiles were in other people’s garages and our winter coats were in a shipping crate on an Atlantic oceanliner, while we were struggling through icy winds to frigid tram stops. We had set a fresh bouquet of Dutch tulips on our make-shift dining room table that overlooked the wood pile and the power tools serving as accessories to the semi-furnished apartment beneath what would one day become “The Zolder.” And we were meticulously working to decipher the application forms for our verblijfsvergunningen (residence permits) — providing us with a critical indicator that we were in for more than just a vacation in Europe.

After three years of adjustment and acclimation, we still feel a bit disoriented at times — socially awkward, misunderstood, lost. We still miss our native land — back yards, long drives, Superbowls. We still yearn for the familiarity of our old stomping grounds, our family, our old friends… Three years is a long time to live thousands of kilometers away from the sphere of existence that defined the first quarter-century of my life.

It’s hard to believe that it’s been three years. Nevertheless, the fact was confirmed with a roomful of friends in our home this past Wednesday. To commemorate the three-year anniversary of our family’s cosmic week, our home group from Zolder50 “surprised” us with party masks, heartfelt words of encouragement, and three home-made cardboard signs, pronouncing “Fijn dat jullie er zijn” (“Glad that you guys are here”)… And we could simply utter three words in response — to our friends and to our God who carried us here — “Dank u wel” (“Thank you much”).