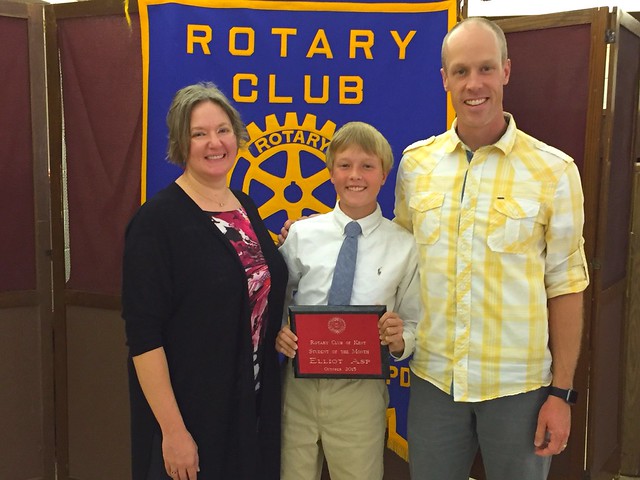 We got a call from the middle school principal last week. Not the kind of thing a parent typically enjoys. In this case, however, the principal was calling to let us know that our oldest child, Elliot, had been selected as the Rotary Club’s Student of the Month for October. So we got to go to a special lunch with various community leaders, listen in on their meeting, and hear a school administrator say a lot of nice things about our son.

These were the principal’s remarks:

This month’s Rotary student of the month at Stanton Middle School is Elliot Asp. A member of the 8th grade Titans Team, Elliot participates in many school and co-curricular activities that qualify him for this prestigious award. His team of teachers record that Elliot is an exceptional student who is committed to making Stanton Middle School and his community a better place. He is kind and helpful to his peers. Within class, he is able to show diversity through accepting peers on different skill levels, personalities, and interests. Elliot is intrinsically motivated, presenting an educational drive in the classroom that is admired by his educators and by his peers alike.

At Stanton, Elliot participates in two sports: soccer and basketball. The soccer team so far is undefeated with the help of Elliot’s leadership. He is a three-year member of the band, a three-year member of student council, and a three-year student ambassador. Elliot likes being involved with sports because it keeps him active, and he likes being involved in leadership roles at Stanton, so he can have a positive influence on the culture and climate of Stanton Middle School. Elliot’s coaches and and advisers all report that he is an asset to their programs and that they are lucky to have him as a part of their programs.

Outside of school, Elliot is a very active member of his churches. He belongs to two churches: H2O and Riverwood Community Chapel. This summer, Elliot went on a missions trip to Kalamazoo, Michigan. During this trip, Elliot helped to clean and organize a homeless shelter, a thrift store, and he also played and spent time with young children at a childcare center. Elliot enjoys giving back to his community and helping people in need.

After high school, Elliot plans on attending college and is considering becoming a lawyer. His favorite quote is, “Everybody is a genius. But if you judge a fish by its ability to climb a tree, it will live its whole life believing that it is stupid,” by Albert Einstein. When asked, “Where do you get your desire for service?,” he replied, “From my parents and from my church mentors.” Elliot is truly honored to be recognized by our club today, as he is joined by his proud parents, Eric and Marci.

We’re proud of our son!

This entry was posted in Children, Family, Kent, Leadership. Bookmark the permalink.